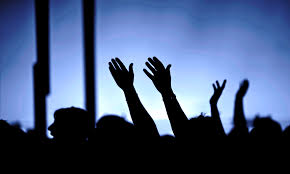 In the spirit of Paula Cole, I’ve been asking, “Where have all the charismatics gone?”  Its been some twenty years since I found myself at a revival service, praying over a friend who had been “slain in the spirit.”

These days, I’m not so sure I have any close ties in that religious world where speaking in tongues, shouting, healings, and exhilarating praise was ubiquitous.

For those who are not up on their charismatic (or, sometimes called, “Renewal Movement”) parlance, being “slain in the spirit” is a physical act of surrendering to God–literally, falling on the ground–in a state of worship.  Like other manifestations of the spirit, it is an outward reaction to an emotional response.  Its something for which Pentecostals are known.

Unbeknownst to many of my friends, my home church in South Florida is a charismatic congregation.  We praised God with abandon, made for a multicultural community that valued “prophecy” and tongues, and danced in the aisles.

I was more subdued–always was a quiet guy (“Sorry, Mr. President, I don’t dance.”)–but I knew of the methods and means of revival, well-versed in the gifts of the Spirit as outlined in Paul’s first letter to the Corinthians, and attended my share of retreats.

I even read several works by Charles Finney for the fun of it.

That was a long time ago.  I can only guess how the charismatic movement is fairing these days.  The only evidence of its presence that I have seen in Georgia of late has been in  the prosperity gospel movement and in some megachurches.

Some denominations, like the Four-Square church and Vineyard Churches, are still carrying on the work of revival and renewal–but they are few and far between.

Furthermore, many charismatic leaders, aspiring to find a sustainable relationship with the academy, became scholars and seminary professors.  Whether it evolved into the megachurch or the ivory tower, this kind of organization is often a spirit-stifling institutionalization that makes the gifts of the Spirit mere products to consume rather than experiences to cherish.

Also, the charismatic movement has not been without controversy and its critics. Pastor David Yonggi Cho of one of the largest charismatic churches in the world, South Korea’s Yoida Full Gospel Church, was sentenced last year for embezzling millions of dollars.

In Southern Baptist life, all things charismatic  is approached with contempt.   At one time, missionaries were not allowed to speak in tongues or “private prayer languages.”  Only recently did the Convention reverse the policy in light of a broadening constituency that struggles to balance diversity and dogma.

In 2013, author and pastor John MacArthur led a “Strange Fire” conference in which he openly attacked  Pentecostals and Catholics, calling the charismatic movement heretical and misleading.

Aside from these issues, churches in the charismatic tradition are actually the fastest growing churches in the world.  To answer my own question, the movement has not diminished, but has been outsourced.

In the global South, Pentecostalism is growing at an exponential rate, claiming the allegiance of over 25% of Christians worldwide.  I may not know any charismatics these days, but its influence across denominational and theological spectrums is undeniable.

Why have I been out of charismatic circles for so long?  Well, just as the charismatic movement has evolved, I have evolved too.

This is not to discredit my charismatic upbringing; quite the opposite: I am grateful for it because I am able to traverse Baptist life as an ordained minister with an intuitive eye on where the Spirit might be leading Christ’s Church.

For the Cooperative Baptist Fellowship, a break-off denomination from the more conservative Southern Baptist Convention (and the network I call home), this charismatic leaning may possibly afford a greater inclusive spirit to diversity, globalization, and pluralism that now defines many churches and neighborhoods.

I am not the only one with a charismatic background in the CBF, and my upbringing has benefited Trinity in continuing a strong foundation for missions, worship, and ministry that fits the eclectic and often-times multicultural milieu in which many churches now find themselves.

Although we have given up much ground to the prosperity gospel movement or an institutionalized consumerist Christian subculture, we who still cherish the Renewal Movement are better for it.