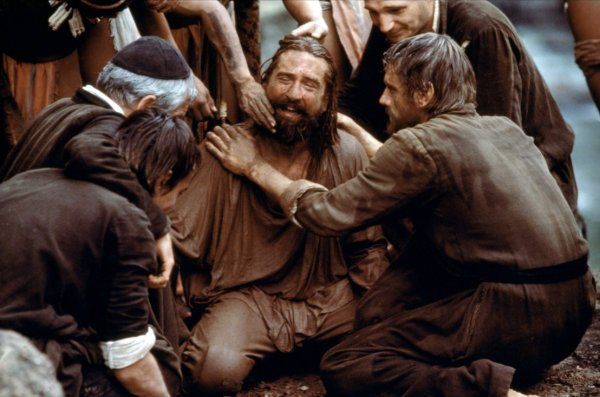 When I was in high school, my sister Gina and brother-in-law Frank invited me to join them for dinner in Manhattan with one of Frank’s clients. Frank was a personal trainer and this client had meant a great deal to him; the client, a Jesuit priest whose name I’ve since lost, had become a sort of mentor and father figure to Frank.

I don’t remember the fine details of our conversation over dinner, but I do remember enjoying the priest’s explanation of Catholicism and the Society of Brothers, commonly known as the Jesuits. I, an evangelical mostly reared in the south, had certain assumptions of Catholics that this particular Brother sought to correct. He did a good job, and I’ve respected Catholics in general and Jesuits specifically ever since.

One other thing I remember clearly is that the priest recommended I watch the 1986 movie The Mission, staring Robert DeNiro. He thought it might be a good historical primer on the work that Jesuits had accomplished over the centuries.

In The Mission DeNiro, a Portuguese conquistador and slave trader, warred with the Jesuits and their work in converting South American Guarani natives. DeNiro ends up killing his brother over a love triangle and runs away to the Jesuits. Father Gabriel, played by Jeremy Irons, takes him in as a sort of disciple.

Much of the movie focuses on DeNiro’s transformation from warrior to wounded servant. The journey he takes is one of redemption, and–as any good epic goes–a discovery that his biggest enemy is himself. God forgives him, but he cannot receive it because he cannot forgive himself.

In one of the most powerful scenes of the movie, DeNiro made a long climb up a waterfall to reach the mission with a band of priests and natives. He is hauling his armor in a sort of net knapsack, and after climbing all the way he falls in exhaustion and pain. A native grabs a knife and cuts the chords to the knapsack, and the armor plummets down the mountain. DeNiro finds liberation. His past, now behind him, no longer enslaves him. The natives accept him as one of their own.

For years and years, I have spent much of my Christian walk trying to figure out what baggage I keep bringing along with me in my ascension towards Christ. What is it that I am holding onto? Where do I need the fresh waters of the mountains and the salty tears of my soul to bless and baptize me? Where do I need Christ’s liberation and permission to forgive myself for all of the stupid things I’ve done and continue to do?

These questions haunt me, and the images of The Mission still ring in my imagination. Its amazing how one Manhattan dinner with a stranger who happened to be a priest made such an impact on my life. I can see–as I realized back then–why this man was so important to Frank’s life.

The last I checked, Frank lost contact with the priest, so I am unable to contact the priest and tell him how much that conversation meant to me. I am unable to convey (on this side of heaven, at least) how his wisdom, grace, and movie recommendation changed my life.

I was a born again evangelical when I met with Gina, Frank, and that priest over dinner so long ago; and I feel I was born again a second time after I walked away from that dinner.