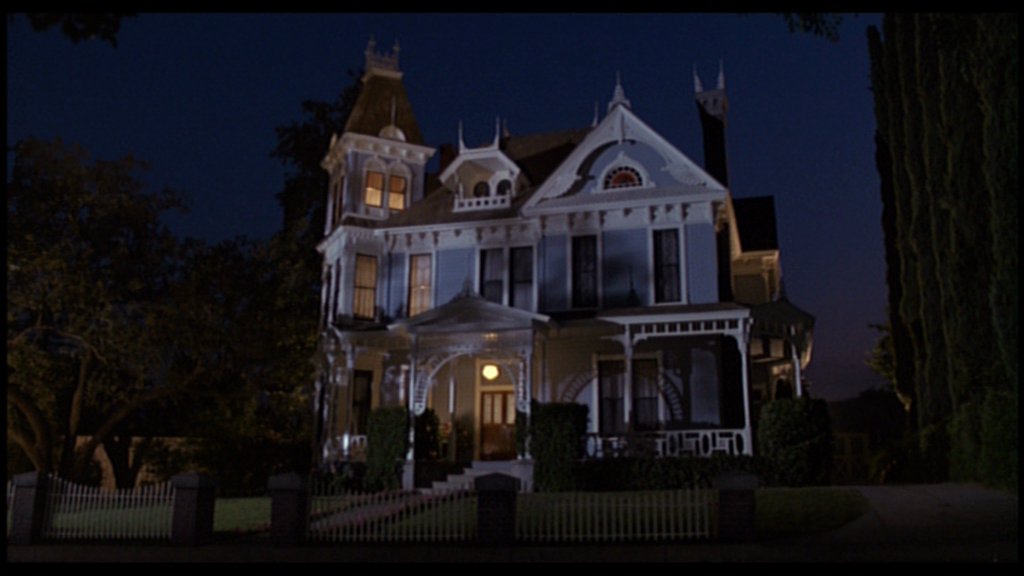 I took a course on faith and film years ago in college. The conundrum is this: does film reflect society, or does film shape society? Same can be said of faith: How much does media, whether film or otherwise, shape or inform our faith?

This series intends to reflect on the films that may have contributed to my faith. I can’t cover all of them, of course; but there are enough movies that stand out to create a fun blog for now.

The film that’s been on my mind is an unlikely one for a pastor: House, the 1985 horror comedy directed by Steve Miner.

I remember the first time I watched it–at my uncle’s house in Homestead, around 1988, on HBO. It made an impression because it was both scary and quirky; I found myself covering my eyes, but laughing too. No wonder the director once mentioned that if parents wanted to introduce their children to horror, House was a good place to start.

House follows horror author Roger Cobb, played by William Katt, who moves into his late grandmother’s house. His grandmother, recently deceased, was said to have been playing with an alternative world beyond the grave. In a turn of events, Cobb’s newest novel, about his experiences in the Vietnam War, comes to life.

Although I was too young to appreciate all of the nuances that House had to offer–the subtext of post-traumatic stress and the unfolding of trauma in the Vietnam War generation– I caught the significance and fear of living in a house that had more to it than just a bunch of cold, empty rooms.

One scene, for instance, finds Cobb wrestling with monsters erupting from a bathroom vanity. The vanity, he later discovers, is a corridor to the netherworld.

In other scenes, we are not sure what is real and what is a figment of Cobb’s imagination. The movie plays with the idea of the house as a metaphor of the mind, especially those who suffer from trauma and the “demons” in the shadows of life.

House metaphors are familiar to Christians. In the Sermon on the Mount, Jesus says that disciples who obey his teachings are like wise people who build houses on firm foundations. After healing a demoniac, he warned that a demon once expelled might return to the clean home of the soul with additional evil friends. In the first letter to the Corinthians, Paul uses a building as a metaphor for the church: Though ministers and parishioners build the house, it is Christ who is the unifying foundation. In later church history, St. Teresa of Avila wrote of faith as a journey into an “interior castle.”

After I watched House, I was afraid to go to bed alone. It wasn’t because the images of monsters kept flashing through my imagination, but because I was afraid that if I closed my eyes, I would lose myself in the dark corridors of the uncertainty and anxiety of my heart and body.

I wasn’t afraid of the dark, but of where the darkness might lead–and whether there was ever an end to it. To this day, the most frightening metaphor I have for hell is not of a fiery furnace, but from writer Jack London: Hell is being wrapped up in eternal darkness.

Darkness–especially the darkness of a corridor that descends into an abyss–is not scary because of its length or breadth, but because of the claustrophobia of the darkness itself. It is being “wrapped up” that gives me chills. (I’m severely claustrophobic, and I also have a fear of heights–which is probably why that bathroom vanity scene in House left such an impression!)

If the adage of “home is where you make it” is true, than a large part of our journey of faith is being able to call your life–your body, mind, and soul–home. It is about being comfortable with yourself and content with the life God has given you. Of course, as a Christian, I have the assurance that when I invite Jesus into my life (otherwise, he “stands at the door and knocks…”), Jesus will take up residency in my very being.

Christ becomes the sure foundation, a foundation which provides a boundary to the abyss and confines the darkness to God’s ever-mysterious presence. Jesus pierces darkness, and darkness cannot prevail.

To this day, I remain enamored by House, and I have yet to revisit the movie in my adulthood. I’m afraid to watch it, not because of the horror of the movie, but because I don’t want to lose the childlike innocence I had when I watched it long ago. If it holds a special place in my life, then let it be so. Who knew a horror film would make such an impact?