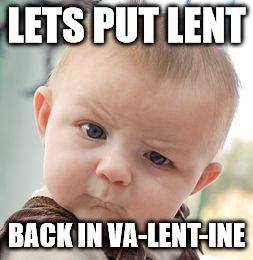 Several years ago–has to be nearly a decade by now–the Holy Spirit convicted me that I needed to learn a thing or two about submission and obedience.  I had been a Christ-follower for some time, but I have always had a flavor for independence and strong-willed stubbornness.

In fact, I became a Baptist not 10 years earlier precisely because I did not want to answer to a bishop, pope, or diocese bureaucracy.  A Baptist minister only answers to his or her congregation, but that’s different: there is a relationship; things are contextual; there is room for understanding and dialogue.  Joe LaGuardia was not going to have to explain his philosophy of ministry to some fool who lives tens of hundreds of miles away.

You can see where my problem and attitude can get the best of me here.

So the Holy Spirit convicted me.  God was going to bend my will towards His own one way or another, and it was going to be during none other than the season of Lent.  I had practiced Lent before, but not as seriously as I should have or could have.

The Holy Spirit showed me the first steps: I felt led to go to a nearby monastery and seek out one of the fathers for spiritual direction.  The Holy Spirit did not give me much of anything else, but that’s the marching orders that I got, so I stuck with it.

When I made the appointment, I was assigned to Father Francis once a month.  His specialty (and the monks do have specialties) was centering prayer, and he wanted to instruct me on this ancient practice–a time of silence and solitude, of centering, of meeting with God for nothing more than to spend time with my beloved Creator–every time we met.

Father Francis gave me a card with instructions, and for the next four months he instructed me on various ways to pray.  I was the one seeking spiritual direction, but I did not get a word in edgewise.  Yet, every time I became frustrated with my sessions with the Father, the Holy Spirit jumped in and reminded me why I was meeting in the first place: this was not about me, it was about submission.  It was about obedience.

I was to obey all of the instructions that Father Frances gave me with no questions asked.

I did.  For the entire season of Lent and throughout that summer, I followed those instructions.  I sat in silence and prayer for about 15-20 minutes a day.  I practiced saying my “prayer word,” and sought to master the nuances of apophatic prayer (those of you who studied this stuff know what I mean).  I did my homework.

I was moved.  I was heart-broken (in a good, cathartic way). I was frustrated.  I was angry– all of the paradoxical feelings that confront us when we fast and submit to the kind of life in which God makes us step out of the throne of our hearts so that Jesus can take his place as Lord of our lives. This prayer-stuff was hard work.

I say all of that now because those feelings still arise in me every Lent.  Although I have done something serious and intentional for the season every year since that time–not to mention writing a dissertation on spiritual disciplines and spiritual direction, of which all of this prayer work and submission had been a part–it is still difficult for me to move over and let God direct my life.

It seems that this season is made more difficult because the Holy Spirit is reviving in me some old wounds that I have not faced in a long time–mostly surrounding some squabbles I had with Baptist clergy several years back.

I won’t bore you with the details, but I am not sure I forgave some fellow pastors who have hurt me during that time.  And, apparently, that hurt still abides; so God is bringing me back to the drawing board again–and its about submission.  It is always about submission.  How else are we to travel through Lent and to the cross of Christ, the very place where we crucify our old selves, false selves, ego, and pride that ensnare us and get in God’s way?

Its a terrible, terrible job (just being honest), but we have to do it.

This year, in order to teach me the full weight of obedience again, God pinned me down on my love for XM radio in the car, to which I’ve subscribed since 2008.  As a result, I will be…..(I can’t even write it but I will)……discontinuing….(oooh, ouch!)…..my subscription….(doh!)…..for a time, and that’s the one thing (the Holy Spirit ALWAYS finds the ONE thing!) that I don’t want to let go of most.  So that’s that.

Perhaps those old wounds–and that clergy battle from years ago–is merely a scapegoat.  I don’t want to cast my love for XM radio at the foot of the cross of Christ, so I’d rather put them there.

So here we go again…

2 thoughts on “The Difficulty with Submission in Lent”