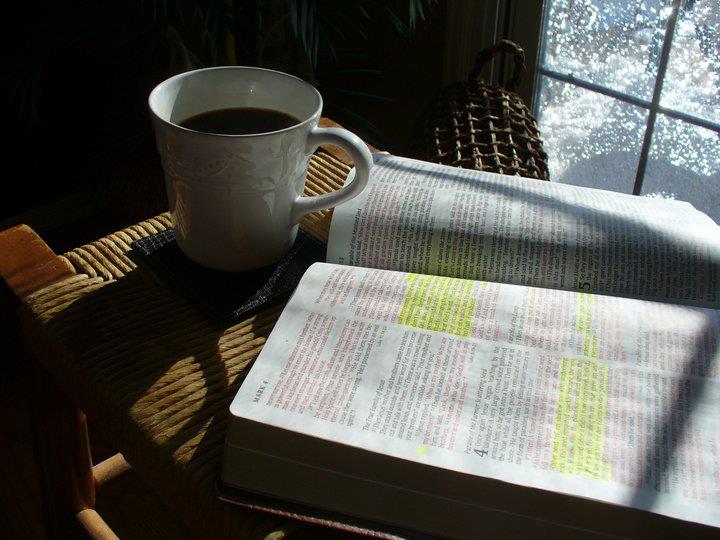 I once had an Old Testament professor who was reading through his grandmother’s Bible.  He had read through the Bible many times before, but this one was special because it had all of his grandmother’s hand-written notes and reflections throughout.

He cherished those notes and found that it helped him experience Jesus in a fresh, vibrant way.

Ever since then, I have been intentional about writing in my Bible, not only to keep track of sermon prep and Sunday School notes, but to make a sort of spiritual record to pass on to my children.

It was several years ago that I found out I was buying too many new Bibles to do this.

I, like so many others in our consumerist society, came under the misunderstanding that buying a new Bible would somehow get me to read it more.  I had to decide on one Bible–one made well, that could travel with me to both pulpit and prayer closet–and start the journey of writing, and to do so with my children and (eventual) grandchildren in mind.

I told this to a colleague who is an associate pastor in the city.  She, too, had a professor who stressed the importance of writing in one’s Bible–in fact, he allowed his students to bring notes for tests to class, as long as they were written in a Bible.  He felt that the notes would be accessible to students well after graduation, as well as build an heirloom of learning for future generations.

There is something about a Bible that is passed on to others that symbolizes the power of generational faith education.

Sociologist, Vern Bengston, writing for The Christian Century (“Families of Faith,” 25 December 2013), argued that a child’s religiosity, or lack thereof, is directly influenced by the faith of his or her parents, especially that of the father.  He also wrote that the faith of a child’s grandparents is just as influential, even if the parents are not religious at all.

Several weeks ago, I held a Bible study at a retirement home in Decatur.  We had a new participant in the class, so I made sure to get to know her a little bit.

She told me that she did not grow up in a Christian household.  She did, however, have a grandmother who was always reading or telling stories from the Bible.

Passing on the faith–sometimes in the form of passing down a Bible–is a significant way to teach the next generation the importance of Christian living.

The Bible explicitly commands that we, as God’s people, have an obligation to do this one way or another.

Teaching children faith–and the Bible–is so very important in our culture today.  A few weeks ago, the Barna group released statistics showing that Atlanta ranked 29 among the most “Bible-minded” states.  That means there are 28 states whose population knows the Bible better than we do.

Can you be counted among the “Bible-minded” in our state?  How do you get your children and grandchildren involved in engaging their faith and learning about the ways and Word of God?  Is it by telling the “old, old story;” or by having a Bible to leave with loved ones after you have gone to be in glory?  Whatever the case may be, God commands us to teach our faith, and we would do well to listen.