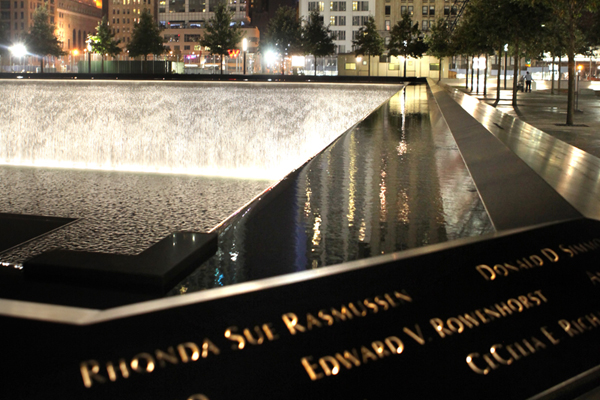 In last week’s article I mentioned that a team of us from Trinity Baptist went to New York for a mission trip.  It wasn’t all work and no play; in fact, we did travel to Manhattan and enjoy all that the city had to offer.

One thing we did was visit the 9/11 Memorial, formerly known as Ground Zero after terrorists used planes to destroy the twin towers over a decade ago.  The last time I was there, tractors and cranes were still removing rubble.

Since then, the construction equipment and bent steel have been replaced by the soaring Freedom Tower (the highest in the world), a museum (not open yet), and two reflecting pools over the original footprints (one is pictured above) where the towers once stood.

As a Yankee, it’s still hard for me to imagine the city without the Twin Towers.  Even harder still is looking at the Manhattan skyline from Staten Island without those majestic buildings dominating the hectic peninsula.  The Memorial, however, is a fitting one, and I highly recommend you visit if ever in the area.

The things that really got me besides the scope of the campus were the walls that surrounded the reflecting ponds.  All the names of the victims are carved into marble facades. There is a wall dedicated to the victims in the towers, to those who died on aircraft, and to first-responders who gave their lives to save others.

I found myself hurrying about, trying to pay more attention to my children than to the names.  I could hardly look at them, as cowardly as that sounds, because it was too overwhelming for me.  It took all I had to hold in tears.

I’ve been to enough cemeteries and funerals to get used to monuments and tombstones.  But, for some reason, there was something about the silent permanency of those letters–the craft and shape made by chisel and hammer–that were powerful reminders that people who were parents, spouses, loved ones, children, friends had died there so unexpectedly.

In the middle of Isaiah (49:16), scripture tells us that God “inscribed” or engraved Israel upon the palms of His hands.  This, like the scriptures before and after this verse, are poetic reminders that God not only cherishes us, but holds us close to His heart and honors us with His very commitment to us.

The inscription upon God’s palms are not a monument to our destruction, however, but to the promise of eternal life: “Your builders,” God told Israel, “outdo your destroyers” (v. 17).  In other words, God doesn’t inscribe us on His palms because we’re doomed; rather, God inscribes us on His palms because God longs to be with us, to always have us before His very eyes.

We can figure this out because of the nature of this poetic love language.  In one part of the Bible, namely Leviticus, God forbids people to get tattoos, specifically when it relates to ancient rituals worshiping the dead.  But here, in Isaiah, God’s poetry related to inscriptions possibly originating from rituals shared between bride and groom.  God is our spouse; we are his people.

Yet, Isaiah’s description of God’s palms is more than poetry.  It looks forward to the death of Christ, whose own nail-imprinted inscriptions from the crucifixion embodied the full measure of God’s love for us.  Jesus’ wounds are a silent, permanent reminder that God cherishes us enough to die for our sins.

Too many of us are busying about trying to keep from experiencing that love.  It is overwhelming to know that God’s son died for us, but once we turn towards him–and believe in him–things come into clear focus.  We experience life, and life more abundantly.

3 thoughts on “We are inscribed upon God’s hands”