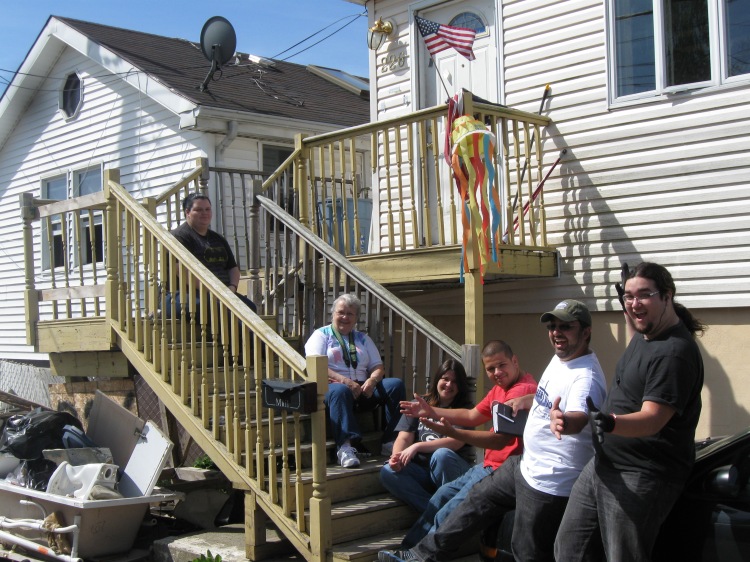 In early June, a group of us from Trinity Baptist went on a mission trip to my home town of Staten Island, New York.  There, we helped rebuild a home damaged by Superstorm Sandy in one of the hardest hit areas, the New Dorp community.

I’ve been on mission trips before, so I had some idea of what to expect: long days, hot weather in dark places without the comfort of either air conditioning or adequate lighting, questionable food that likely was not on my diet.  But, aside from the fact that some of this was true, it was a relatively easy-going trip.

There was no air conditioner, but there was a constant cool breeze coming off of the beach.  The food was pretty good, and the homeowner was nice enough to bring us pizza for lunch a few days while we were there.  For a bunch of misfit missionaries tasked to help relief efforts in a destitute place, we had it made.

While I worked comfortably, I couldn’t help but think of the irony of the whole thing. We were on mission in a place that faced some of the most treacherous natural disasters last year.  While I was thanking God for cool weather, it was weather that damaged the house in the first place.  While the group and I asked God’s blessing on pizza, families had been torn asunder and would never eat with loved ones ever again.

Although official reports gave a modest statistic that less than 150 people died in the wake of Superstorm Sandy, there were untold hundreds more–at least 200 in Staten Island alone–who died as undocumented victims.  These were illegal immigrants who were either unclaimed by loved ones (for fear that they would be deported) or unrecognizable by authorities.

People lose their lives in our nation every day–by natural disasters, gun violence, random auto accidents, you name it–and I’m worried about lunch.  Perhaps the greatest lesson I learned in New York was humility and who is really in charge.

“God is our refuge and strength,” the author of Psalm 46 wrote, “a very present help in trouble.  Therefore we will not fear, though the earth should change..though its waters roar and foam” (v. 1-2, 3).

I think we would all do well to run to God as one who provides refuge because all of us will face hardship one way or another.  I may have helped someone with their home last week, but it may be my roof next week that gets smashed by a windswept pine tree and needs volunteers for rebuilding.  You never know.

Psalm 46 encourages us to seek God as a refuge because we need to rely on God no matter where we are in life.  Only then do we discover that His presence has a calming affect: “There is a river whose streams make glad the city of God” (v. 4).  Floods may come, but water becomes an obedient river at God’s feet.

We will certainly be in need a time or too, and at other times we will whine and complain that the air conditioning is broken or lunch was lousy, but we all need to heed the challenge of Psalm 46:8: “Come, behold the works of the Lord.”

I saw what kind of destruction an 18-foot storm surge can bring, but I also beheld how a small group from Conyers could create a new floor, walls, and laughter for a family who lost everything.  It was not the hardest trip I’ve ever taken, but it was certainly a memorable experience fit for the Kingdom of God.

We are thankful to our church, Trinity Baptist Church, and the Cooperative Baptist Fellowship of Georgia for providing the resources for making this trip a reality.  We also thank Church at the Gateway, Staten Island, New York, and Touch the World Ministries in hosting and facilitating groups in Staten Island.