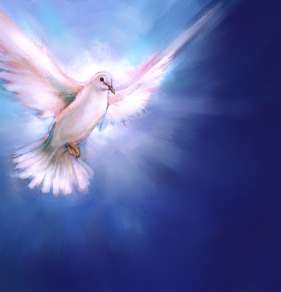 In last week’s article, I mentioned a question my daughter asked before her great-grandmother’s funeral.  “If Grandma is in heaven, then why is her body still here?”

She posed the question while we were on the way to the wake.  Since this would be her and my son’s first funeral, my wife and I explained what they needed to know and what to expect.  Yes, Grandma died, but she is in heaven with Jesus.  Yes, we can be sad, but we will still celebrate her life as we worship God in Grandma’s  Catholic church.

Her specific question, however, recalled my seminary days when our professors gave us some advice on these things.  “Be honest,” they said, “and explain your theology as literally as possible.”  Easier said than done.

I also found myself wrestling between two theological extremes as I sought to articulate an appropriate answer for her.  The first extreme emerged from a more evangelical point-of-view.  This was the theology of my upbringing and still remains an important part of me even today.

This perspective sees the spiritual world as the only valuable and “good” world, pitting it against a this-wordly, flesh-oriented sinfulness that exudes all creation.  In fact, the spiritual world is so superior that we Christians need not worry about how we treat the environment.

I was reunited with this theology when I drove behind a Hummer with a Christian fish sticker a while back.  Here was an ancient symbol–the Ichthus– Christians once used to communicate with one another during the height of Christian persecution under the Roman empire.

At that time, Christians consisted mostly of underprivileged and peasant classes (one ancient writer, Pliny, called Christians of this era the “dregs of society”), whereas the empire represented people of wealth and power.

While the fish continues to subvert power by declaring Jesus’ eternal promise of resurrection even in the face of the empire’s power, a Hummer, for all practical purposes, is a symbol of that very power and privilege.

(Before I lose you here, let me say that I’m not one to pick on people with fancy cars–Trust me, if I had a lot of dough, I’d be a proud owner of a 19-mpg Porsche.)

Driving behind the Hummer, despite my silly musings, certainly reminded me of the conflict that exists in putting two radically opposing symbols, one of self-annunciation in the name of Christ and the other of self-gratification in the name of prestige, together on one piece of machinery.

More significantly, a Hummer also seems to communicate that this world is not worth saving.  After all, who cares about carbon emissions when this world is  fleeting away before our eyes?

It opines that this life is all that exists and any hope in an eternal, spiritual existence with God is a foolhardy dream.

A recent article on funerals printed in a liberal Christian publication pushed this notion.  The author’s words made me feel that my hope in Grandma’s union with Jesus in heaven is a mere “Gnostic denial that the person has died.”

In other words, since I cannot know for certain that Grandma’s spirit is with God, then why spend the time talking about it as if it is literally true?

As I drove to Grandma’s wake, I simply stuck with my professors’ advice.   I didn’t go the way of the Hummer, the fish, or liberalism.  I simply told my daughter that Grandma’s spirit is with Jesus in heaven even though her body is here because today isn’t the day when we all get new bodies from God.

There will be a day when God makes all things new; but, until then, we have to care for Grandma’s body–and all God’s creation–because it is as precious in the sight of God as heaven itself.

My answer balanced both my evangelical and more progressive leanings.  It left enough room for me not to be a hypocrite if I ever choose to purchase a tank of an automobile some day; and, most importantly, it allowed all of us to grieve and celebrate, mourn and rejoice.