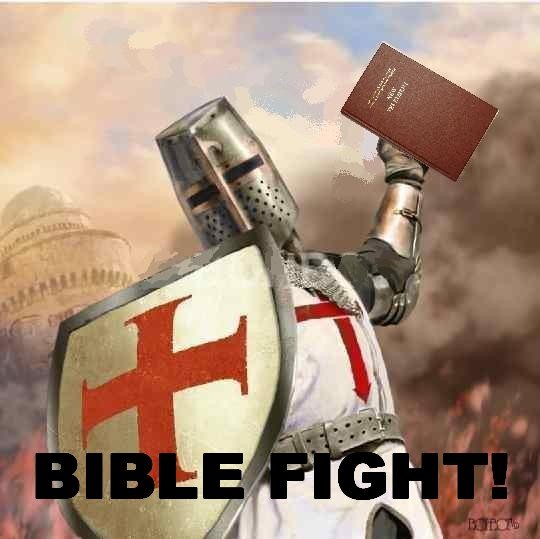 I am convinced that debates over Bible interpretation and theological arguments are the most destructive trends in church life.  I would even venture to say that a majority of conflicts throughout Christian history started over differing Bible interpretations.

Take a recent Baptist conflict for example.  It was just last year that the Georgia Baptist Convention withdrew fellowship (in other words, kick out) Druid Hills Baptist Church because Druid Hills has a female pastor.   The year before, the GBC did the same with First Baptist of Decatur, rupturing a relationship 148 years old.

Both communities debated the validity of their biblical call to faithful adherence to scripture.  People were hurt, lives were trampled, denominational relationships were ruptured.

The same can be said about other issues in church history ranging from slavery to homosexuality, alcohol use to infant baptism.  When a debate escalates over who is more “biblical” or “Christian,” then a conversation between friends can quickly devolve into a war among enemies.  It’s what late theologian Letty Russel calls “textual harassment.”

Does this advance the Gospel?  I doubt it; in fact, as a pastor, I hear so many people say that they don’t attend church any longer because they despise how Christians abuse each other with the Bible.   Organized religion, so the thought goes, only leads to violence and conflict.  (A closer look shows that organized religion isn’t so organized after all.)

“There are six things that the Lord hates,” wrote the author of Proverbs, “…A lying witness who testifies falsely, and one who sows discord in a family.”  Perhaps our focus on this text might bring about a conviction that bears testimony to the importance of unity in the Body of Christ.

I once heard of a deacon who was looking to oust his pastor because the deacon believed that the pastor was preaching against, you guessed it, the Bible.

He met with other deacons and Sunday school teachers.  He arranged to have a large group of allies attend the next business meeting to confront the pastor.  In the meeting, he gave a long speech about preaching “according to the Bible.”

Two factions grew out of the conflict, one for and one against the pastor.  People started back-biting and name-calling.  Attendance dwindled, finances became scarce.  The church eventually closed.  Both groups lost their home of worship.

When I heard this heart-wrenching story, all too common in many churches, I was reminded of the parable of the sower.  In the parable, Jesus states that the Word of God is like seed that spreads in all kinds of places, like rocky crags or rich soil.

Some well-intentioned churchgoers, like the deacon mentioned above, believe that when they advocate for what they believe is “biblical,” they are simply spreading seed where it belongs.

It is easy to confuse what we sow, for we may be sowing discord rather than Good News.  And, perhaps we are not the ones sowing seed.

According to Jesus, one of the places that the seed fails to grow is in the midst of a thorny, weed-infested patch of garden.  The seed takes root and grows, Jesus said, but then thorns choke out that plant until it sees better days.

Are we sowing what we beleive to be “God’s Word” when we are so adament about our interpretation, or are we merely the very thorns that choke out healthy, mature plants because we place our ideologies above relationships?

It was Arun Gandhi who once said, “People of the Book risk putting the book above the people.”

And Barbara Brown Taylor writes in Leaving Church, “The whole purpose of the Bible is to convince people to set the written word down in order to become the living words in the world for God’s sake.”*

In a world in which less and less people are willing to visit our churches, hear the Gospel, or even consider Jesus as their personal Savior, we need to get past our inter-church squibbles and put relationships ahead of division, ideology aside for unity.

To read more, see Bill Leonard, “The Bible Tells Me. So?” on http://www.abpnews.com.