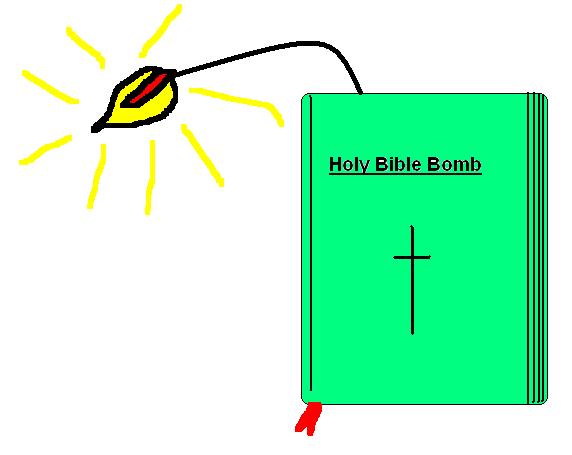 Most of you have heard about the tragedy that occurred last month in Afghanistan.  U.S. security forces found POW Qurans containing hand-written subversive messages, so they confiscated them and burned them.

Whether the burning was intentional or not has yet to be determined, but the “defiling” of Islam’s sacred text created protests that left 40 dead.  We are all disheartened, not only by the event itself–who would burn such a text?–but that lives  have been lost as a result.

I guess we Christians think that we have evolved and transcended such a worldview.  Burn a cross or a Bible, we most likely will not kill 40 people.  These are only signposts of the real thing: They point to God, but they are neither God nor something to be worshiped as a god.

When you look deeper, however, we Christians take some signposts or symbols of our faith seriously as well.  Just try to take someone’s “assigned seat” at church the next time you visit another congregation.

Some churches will kick you out if you’re not wearing a suit.  And just try to remove the picture of the Ten Commandments from your local courthouse and see what happens.

Yes, we have our signposts, and we have our church groups–be they committees or our churchly “neighborhood watch group”–that legislate all of the rules, both written and unwritten, in our church.

Some churches are worse than others.  Some churches really have strict rules, and those watch groups use Bibles almost like tasers if you get out of line.  Some churches have so many rules, they forget that Christianity is all about relationships rather than rules in the first place.

Some of you have come from churches where you have been the recipient of a “Bible tasing” a time or two.  You’ve been spiritually abused, or you have been excluded or hurt by a community who believed that they were keeping their sacred space “pure” from whatever “defiling” actions you did.

When it comes to rules at church, be it here at Trinity or elsewhere, what is really at stake?   Identity.   Our signposts, from Bibles to burqas, music to mosques, communicate something about a group’s identity.  And we take that stuff seriously no matter where we are from.

And what is a neighborhood watch committee but gatekeepers and guards of a community’s identity?

In our text today, Jesus and his disciples have a run-in with the neighborhood watch committee–the Pharisees–whose job it is to make sure every Israelite is upholding the identity of God’s special people.

The Pharisees had a legitimate complaint: Jesus and his disciples failed to wash their hands before eating.  We may tell our kids about the importance of hand-washing before each meal, but this was more than good hygiene.  For Israelites in Jesus’ day, washing and dietary laws had to do with identity and holiness.

“The Jews were very conscious of their status as God’s chosen people.  Years–centuries actually–of being hated, persecuted, overrun, sneered at and generally ill-treated by the rest of the world had hardened Israel’s sense of God’s choice into a solid wall, an invisible steel fence around their national identity.”

And a Bible war ensued, and the Torah was ground zero for their arguments.   They crossed words, and scripture started to fly.

I remember a recent story that broke in the AJC about Druid Hills Baptist Church in Atlanta.  Last year, the Georgia Baptist Convention “disfellowshipped” (read: kicked-out) Druid Hills because the church called a female pastor.

When the story broke, a Bible war broke out in the public square.  Both camps were quoting scripture, justifying their positions with God’s call upon their respective institutions.  They were lobbing Bible bombs at one another. (To be fair, the GBC threw more bombs than the other.)

Ever get a Bible bomb thrown at you?  I have several wounds from those things!

When Jesus confronted the Pharisees about his indiscretion, he did not make excuses or shy away from the accusation.  Rather, he posed a counter-response about the intent of a person’s heart:  The Pharisees worshiped God and followed rituals–they were good at what they did–but their hearts were far from God.

The debate moves from hand-washing to the deeper issue of God’s Law versus human tradition.   Whereas God’s Law–Torah–transcends time, human tradition is culturally bound; it only works for a time or a season.  The pharisees have their rules, but they forgot that the rules were meant to bring redemption, not condemnation.

Rules, to be specific, threaten to choke religion out of people.  Rules can leave broken relationships as collateral damage.  It replaces the heart with mere ritual.

What does all of this talk about rules and relationships say about Jesus?  Did Jesus merely push aside all of the things that promoted purity and holiness in exchange for a “everything goes” mentality?

No.  Jesus does not do away with those things that make God’s people pure; rather, he redefines purity in the truest sense.  Jesus takes us back, literally, to the heart of the matter.

N. T. Wright has some more words for us to consider: “Outward purity–washing the hands, not eating certain foods–is simply a signpost to the real thing.  Jesus seems to say: Don’t mistake the signpost for the real thing.”

Note verse 15: “There is nothing outside a person that defiles, but the things that come out are what defiles.”

Jesus does not stoop to relativism, he ups the stakes by getting right to the heart: It’s our heart, and those things that reside in our very soul, that determines the make of a man.   Later, Jesus tells us what defiles a person: adultery, lying, slander, and the like.

It’s the heart that determines character, not one’s outward appearance.  It’s the relationship that we have with God that determines our sanctification, not the rituals of our faith, no matter how important those rituals may become.

No matter what a committee does for the sake of helping us to become pure, to craft our identity–be it the worship committee or the Faith in Action committee or even Church Council–no outside body can determine the purity of your heart.

The season of Lent can become a time to focus on signposts.  Someone offers you chocolate and you politely decline giving Lent as a reason.  The ritual turns into an activity in focusing on the outward results.  Lent is, however, a time to determine the inner disposition of our heart and the extent of our relationship with God.

We may worship and we may do Lent, but are our hearts far from God?

Consider that the Bible wars and Bible bombs that we throw in the name of defending our interpretations of God’s word are mere side shows to the real heart of the matter–the spiritual geography of our soul.

And it is the endless debates over scripture that threatens to make void the Word of God that becomes incarnate in our midst through the quality of our relationships and the integrity that we honor as a people.  It is our experience of He whom scripture reveals that makes our rituals and religion more authentically transforming as we live out our daily and weekly faith.

Take it from 1 Samuel 16:7: “For the Lord does not see as mortals see: humans look on the outward appearance, but the Lord looks on the heart.”

My prayer for this community, for me, for all of you, is that we will not be hypocrites.  My prayer is that we will live out our faith with authenticity and a deep sense of calling, but not at the expense of our relationship with a God who expects more of us and more from us, a purity that goes far beyond any rules we can seek to establish.