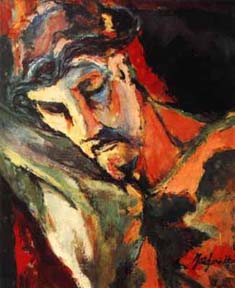 Tucked in the middle of the book of Acts, somewhere around the fourteenth chapter, is a story about Paul’s mission trip to Lystra.  There, he miraculously heals a man who couldn’t walk from birth.  The locals claimed that Paul was a god, and they worshiped him against his will.

That was, until a group of Jewish fundamentalists came to town and turned the people against Paul.  They stoned him and threw him outside of the city walls.  Paul was on the verge of death before he had his own miraculous healing, and he was back in the city preaching soon thereafter.

Was Paul a glutton for punishment or did he really seek to suffer for the sake of the Christ in order to be a witness to others?  It’s hard to believe that Paul did see something divine about persecution; ours is a society that frowns upon suffering or any discomfort whatsoever.

We value happiness and bliss.  We spend a lot of money to overcome our lack and wanting; we break commitments and promises if they become too inconvenient.  Even our marriages become expendable if the emotional toll is too painful.  We have a bad habit of thinking there’s nothing worth fighting for anymore.

Yet, when we look deeper into Paul’s own life, especially some of the letters he wrote from prison (Philippians, Ephesians, Colossians, as examples), it doesn’t take long before you get the sense that Paul did see suffering as consequences of being obedient to the Gospel, keeping one’s commitment to others, and witnessing in the most hostile environments.

In Colossians 1:24 Paul wrote that he rejoiced “in my suffering for your sake.”  Elsewhere he claimed that suffering was a spiritual discipline that ultimately conformed him to Christ: “I have been crucified with Christ, and it is no longer I who live, but Christ who lives in me.”

In an article on this very subject in the 2011 issue of Journal of Spiritual Formation and Soul Care, Steven Spivey notes that suffering is a part of the process of following Christ.  It is not an act of suffering for suffering’s sake, but a result of being faithful to Christ in the face of the status quo and of walking alongside others who suffer.

Suffering in the face of evil, for instance, was what energized the Civil Rights movement.  In his sermon, “Transformed Nonconformist,” Dr. Martin Luther King, Jr., notes that, “To be a Christian, one must take up his cross, with all of its difficulties and agonizing and tragedy-packed content, and carry it until that very cross leaves its marks upon us and redeems us to that more excellent way.”

From a Christian’s perspective suffering as a result of obedience–in our commitment to others, in relationships that are fragile, in the midst of economic hardship in which we sacrifice certain conveniences for our children or for our neediest neighbors–produces godly character that sustains the test of time.

Jesus is our living witness: In Revelation, he came to the persecuted church as a slaughtered Lamb.  On the day of his resurrection, he revealed his wounds to a broken, grief-stricken body of believers.  William Sloan Coffin once noted that Jesus “agreed that there were some thing worth living for that were also worth dying for.”

When we follow in Paul’s footsteps and, ultimately, follow the will of God, we too can see the divine meaning behind some of the hardships we face when we give our lives to others and to the Kingdom of God.

It’s a journey that leads to joy, and it’s a journey that lets us become the very broken bread–the Eucharist–through which Christ continues to work in the world and nourish the broken souls of others.  The words of Dr. King ring ever true, “Christianity has always insisted that the cross we bear precedes the crown we wear.”  Let us not lose heart, and rejoice boldly.  Amen, and amen.