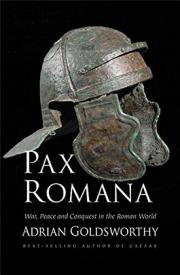 Its not everyday that I get to try a new hermenuetic on for size.  Hermenuetics is the study of interpretation.  Like scientists who can switch out microscope lenses to vary magnifications, we Bible geeks can swap out various interpretative lenses in order to read scripture differently.

I stumbled upon a review by Tony Jones of Adrian Goldsworthy’s Pax Romana that offers a new lens.  Goldsworthy claims that we westerners have understood Roman culture and politics through the eyes of the New Testament for far too long.  The review recommends switching the lens, to read the New Testament through the larger worldview of citizens of ancient Rome instead.

Goldsworthy argues that Palestine was quite insignificant to the Roman Empire.  It was too small to call a “true province,” too poor to justify a Roman legion to police the area, and too unwieldy to pay too much attention to policies that affected the area.  Palestine was, in fact, too hostile and violent to create anything other than a modest military presence that quelled protests every now and then.  Jones notes,

“The internal strife in Judaea was among the worst in the empire: Jews hated Samari­tans, Samaritans hated Jews, and they both hated gentiles. Constant civil conflict in the territory vexed the governing Romans.”

In other words, Romans had prejudices against Palestine and its people.  This may be helpful in reading the Bible in general and the Book of Acts in particular.

According to tradition, Luke authored both the gospel and the book of Acts as a two-part work to a mysterious benefactor named Theophilus (although some scholars argue that Theophilus is a community rather than an individual; I beg to differ), who was likely a gentile–Roman, in fact!–who stood on the verge of making a decision about either hosting a Christian church or funding church starts in his community.

The fact that Luke’s Gospel includes more teachings on money, resources, and hospitality than any of the other three gospels combined points to this rhetorical thrust in Luke’s motivation.

Yet, if Theophilus was indeed the gentile that we all assume he was, then it is also safe to assume that his outlook on Palestine, and the Jews that made up this early Christ movement, included the very  same prejudices Rome espoused.  There is little reason not to think that Theophilus, like others in his time, saw Palestine as a place of hostility, conflict, and discrimination.

There is little reason not to think that Theophilus, like others in his time, saw Palestine as a place of hostility, conflict, and discrimination.

The first two chapters of Acts affirms this reading of Palestine in several ways.  In the first chapter, for instance, the disciples are still set on having Jesus–now risen from the dead–to recruit an army and usher in the kingdom of God.  This is not unique to Jesus’ disciples.  Other Jewish movements sought to inaugurate God’s kingdom, which meant funding and recruiting an army, overthrowing the Roman Empire, and establishing a theocracy once and for all with Jerusalem at the center.

In Acts 1:6, the disciples asked Jesus, “Is now the time that you will restore God’s kingdom?”  It is the “now” and the “restore” that tip us off to the violent intentions of the disciples.   John Polhill quoted R. Pesch when he wrote that Jesus did not reject restoration; rather, Jesus “depoliticizes it,” moving an agenda of restoration out of the purposes of the disciples and into the providence of God.

Let me put it another way: Even if the disciples didn’t have violent intentions, there is good reason for us to assume that Theophilus likely surmised as much.

In God’s economy, Jesus flipped the coin on its head.  Just as Jesus argued in Luke’s Gospel, Jesus here posited that the reign of God is neither bound by region nor vested in the violent protest of an army with sword and spear.  Judas’ failed attempt at trying to force Jesus’ hand was in the past–his replacement in Acts 1 points to the fact that Judas’ own motivations stood firmly on the forefront of the minds of the disciples.

In addition, Luke clearly utilizes the rhetoric of violence, hostility and discrimination to reinforce Jesus’ peaceful and non-violent gospel message in a way that further turns violence on its head in Acts 2.

Acts 2:1, for instance, describes the advent of the Holy Spirit as a “violent” or “mighty” wind.  This is not accidental or a mere poetic word choice; it is a purposeful rhetorical device that calls into question the type of violence that God’s reign enforces.

Second, the Spirit fell on the disciples like a fire.  Fire was a common weapon of war that would have certainly been used to raze villages and incite destruction and intimidation (see Joel 1:19-20; 2:3).  If the symbol was there merely to reflect the life-giving nature of the Spirit, why not use water  (Joel 2:23) or another natural element more fitting for the birth of the church?

Third, the Spirit empowered the disciples to cut across lines that Jewish discrimination would have perpetuated.  The disciples spoke in languages shared not by their families or villages, but by regions that Jews would have perceived as enemies, the Parthains, Medes, Cretans and the like.

Pentecost is an assault on nationalism, racism, sexism, classism–every way in which we separate one another…It is a surge of the Spirit that pushes the church out of the building and into the neighborhood.  –Rev. Dr. Brett Younger, Plymouth Church, Brooklyn

Acts 2 recalls that a crowd gathered as a result of what appeared to be the formation of a violent uprising in an upper room in Jerusalem during a high holy day.  Certainly, Pentecost, like other Jewish holidays that attracted pilgrims, created a hot bed for violent protests.

Peter spoke with brilliance not common among illiterate fisherman in the first century, and he quoted Joel to articulate the kind of movement for which Christ’s church will become known.  It was neither violent or hostile; rather, it was an inclusive message in its embrace, and peaceful in its purpose.

The words of Joel’s poetry reinforces what Jesus preached all along: God’s reign would not be defined by the prejudices, conflicts, and violence for which Palestine was known.  Rather, it would be a reign that disrupted status quo, turned the world upside down (a blood moon!), and broke down gender, generational, and socio-economic, class boundaries.

From Joel’s point of view (see Joel 3:9-10), this is a call to war as a result of God gathering nations for the purpose of executing judgment.  Peter’s rhetoric, combined with Jesus’ vision of salvation and community, declared different terms for peace– a peace brought not by weapons of destruction, but by life-giving proclamation, visions, dreams, and “portents”.

Luke wrote his gospel and Acts to a Roman audience, an audience that held certain prejudices towards Palestine, the Jews, and, naturally, Christ-followers who made their way out of Jerusalem and Galilee.  It is no wonder that Luke utilized the rhetoric of conflict and violence, not to perpetuate a caricature of a violent Jewish community, but to redefine Christ’s Church and its mandate according to the peace, hope, love, and joy that resulted from being a follower of Christ, a Savior who knew–and knows–no bounds, who longs to save all who are both near and “far away” (Acts 2:39).