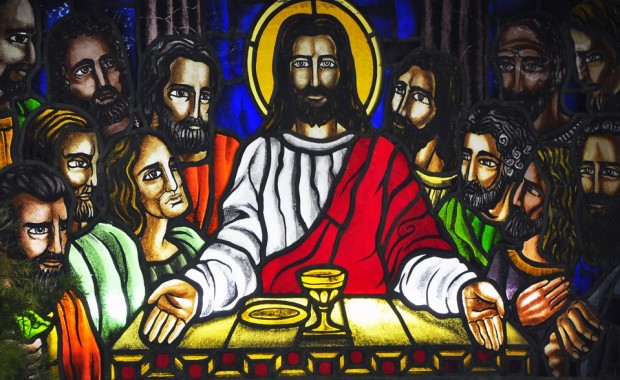 Several months after Kristina and I moved to Georgia, I was throwing trash away in our apartment complex dumpster when I spotted a painting of the Last Supper of Christ.  Unlike the Da Vinci paintings I had seen before, this one was different: all of the disciples and Jesus were people of color.

I took the painting home and showed my wife, wiped off the dust that had collected on the canvas, and put it in my home office.

When we moved to Georgia, we were astounded at how many Baptist churches were segregated between black and white congregations–we came from a multicultural, diverse church.

That day, I realized that some churches segregated Jesus too.

I can’t blame some communities for portraying Jesus as black (or Latino).  A white Jesus, inspired by European artists, is just as mythic.  Jesus was probably a stereotypical Mediterranean with olive-skinned complexion, dark hair, dark eyes, and skin tanned and cracked by the harsh middle eastern sun.

And who would want a white Jesus in a predominantly African-American place of worship in the first place, a constant reminder of the prevailing white hegemony of the last three centuries of American history?

In fact, it was white theologians in the eighteenth century, not black ones, who questioned whether there were two Adams–one for white people, and one for people of color–in which only one Adam (I’ll let you guess which one) begot the true human race.  So having a white or black Jesus is a significant symbolic choice, especially after the Black Liberation Theology movement in the 1960s.

A few weeks ago, I preached on Luke 14 at church.  It recalls the story when Jesus went to a Pharisee’s house for dinner and told the guests that if they ever threw another dinner party, to invite not the righteous and healthy folks, but the blind, crippled, poor, and beggars.

When I was praying about this story, my mind focused on Christ as honored guest at this dinner party.  I tried to picture Jesus sitting there eating, talking, challenging, and storytelling, because I really wanted to get into the drama of the whole thing.

I was surprised when I reflected not on the Jesus I am used to envisioning in my prayers, but Black Jesus in that painting from so long ago.  Distracted for a minute, I soon realized Jesus did not want me to look at him at all.  He wanted me to look around, beyond the table to the very people Jesus described as on the margins of society, those who are poor, broken, and outcast.

We look to Jesus for many things, and we see him many different ways.  We love Jesus and want more of him in our prayer life and in the daily journey of faith.  But sometimes our fixation with Jesus overwhelms our outreach to those for whom Jesus cared most.  After all, he said that when we help those in need, it is as if we are helping him.

Where do we find Jesus but in the face of the poor, in the disfigurement of the crippled, and in the wounds of the brokenhearted?  In our suffering neighbor, the Lord comes to us as the suffering servant, a figure upon the cross who sought to heal and restore those who bear their own crosses.

Look at Jesus, but don’t look at him too long.  Look around.  Next time you throw a party, invite those who cannot repay you and who will become Jesus to you.  When we serve the least of these, we serve Christ himself.