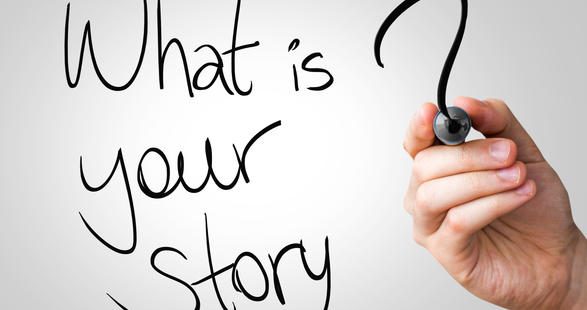 I love a good story.  Before I came to the South, I thought I had mastered the art of listening to and telling stories.

It was around the table with my family in New York that I heard captivating stories as a child.  My uncle, married into the family right from Italy, debated politics with my father, cursed the Pope to places I could not repeat as a child, and told stories of the mafia in the Old Country, all in broken Italian and shaking fists.

Then there were my cousins.  One recited lines from the Terminator movie in a generic Schwarzenegger accent and showed off his single, cross-shaped earring inspired by George Michael.

His brother was a master storyteller, telling us stories all of the time, especially when it came to his career.  One year he was in the Air Force.  Then he worked at an airport, then as a cop, then a dancer.  More recently, he’s been an air marshal, in the FBI, dug holes at a cemetery.  He is now in law school, but no one really knows for sure.

When you live with Italians, storytelling is in your blood.

But then I moved to the South.  It was here that I heard mountain stories of the Appalachia, immigrant stories of Miami, ghost stories of the Georgian coast, and Bible stories by the likes of Fred Craddock, Clarence Jordan, Flannery O’Connor, and Ernest Hemingway.

This is also the place that I heard stories about the church and the story of the Church.  It is where I came to understand–and believe in–the Gospel of Jesus Christ, the good news of God’s salvation for all the world, north and south alike.

That was the old, old story that really made a difference in my life.

We all need a reminder of what the Gospel is.   It comes from the Greek word, euangelion, from which we derive the words evangel and evangelical.  It was a message of good tidings often used in the wake of a battle.

A messenger, (angelion in the Greek), came to tell good news of a king’s victory in battle.  So good tidings included both the message and the messenger.  It is no wonder, therefore, that the same Greek word for messenger is also the word for angel, for angels were messengers of good tidings from God.

It is as if a bunch of guys were sitting around a campfire, debating how all of this redemption and salvation stuff were to occur, and one of them spoke up and said, “Well, God has to have a say in all this, doesn’t he?”

God did have a say, and that say was the Living Word of the Lord Jesus Christ, who was God in the flesh.  Jesus was God’s say in all of this and, in fact, God’s final say, “For all who believe in him shall not perish but have everlasting life” (John 3:16).

The Gospel is, therefore, about the person–Jesus–as well as Jesus’ message.  It is about the good news that God is victorious over sin and death.  God fought the good fight in sending Jesus Christ, and the resurrection spelled the end to every foe that ever threatened both man and creation.

With all of the stories I’ve heard through the years, I have found that the most power couched in the story of the Gospel.

Even today, it emboldens, empowers, and exalts all those who take God at God’s word.  And in a world in which good news is hard to find, the good news of the Gospel is as fresh as ever.

2 thoughts on “How I love to tell the Story”