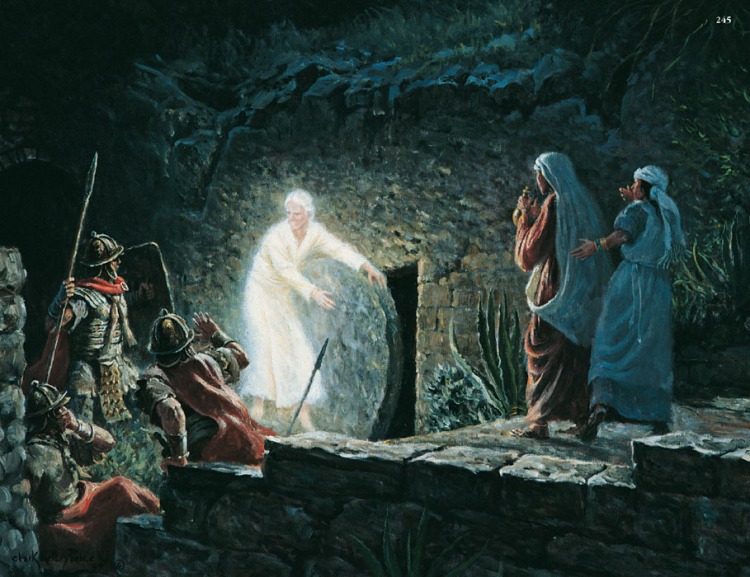 According to Matthew’s gospel, on the morning that Jesus rose from the dead, several women were commissioned to tell the disciples all that had taken place.

Fear and joy is not a likely pair.  Usually, we experience one or the other.  We fear of those things we do not understand or are uncertain about; and joy over the things in which we are confident and hopeful.

The women were fearful and filled with joy, however, because that’s what happened when they confronted the greatest truth known to humanity: that in raising Jesus from the dead, God began a new work in which the kingdom of heaven broke into our earthly realm in a mighty and transformative way.

Ever since they joined Jesus, the disciples knew that there was something about this fellow from Galilee.  He healed the sick, partnered with outcasts, spoke with authority that stumped the religious officials, and performed miracles.

It was frightening to be in Jesus’ presence: Each disciple recognized that their lives were at stake, and each disciple had to choose every day whether they would follow Jesus.

At the end of Holy Week, however, that fear came to a crescendo as their Lord was executed in the worst way possible.  The disciples ran for the hills; it wasn’t Jesus they feared, it was Rome and the Jewish authorities who put to death the only hope they had.

Why did the women fear, then, if they knew that Jesus rose from the dead?  Wouldn’t they have remembered all that Jesus told them about having to die for the sins of the world and overcome death itself so that those who believed would receive eternal life?

They were fearful because the resurrection event confounded their very beliefs in what was possible.  No one before that time had ever been resurrected from the dead in the way that Jesus was.  He was now at the right hand of God, and all authority had been granted unto him.

That was an awesome premise, and it made the women shake in their boots.

The women were also filled with great joy.  God certainly did something in and through Jesus Christ that caused them to be scared, but there was an unyielding notion that Jesus’ resurrection insured all of their resurrections when that great Day of the Lord finally arrived.

Jesus’ life and presence guaranteed that their lives would also inevitably be different.  They would have access to God under the umbrella of grace, mercy, and reconciliation.  Who wouldn’t feel profound joy in that truth?

Even today, nearly two thousand years later, we experience faith with a profound sense of fear on the one hand and inexplicable joy in the other hand.

In the death and resurrection of Christ, we catch glimpses of our present (death) and our future (resurrection).  Fear and joy, indeed.

But we also fear the Risen Christ to the point that we avoid him sometimes.  We don’t invite him fully into our lives.  We hide things from him.  We cower in the shadows when his light pierces our darkness.

Although this particular word, “fear”, in the Bible may also be translated as awe, I like to think that fear is accurate in this context because we are afraid of God no matter how much we know God’s grace covers us for all eternity.

Joy is also present in our lives because when Christ died, our old life died with him.  Jesus’ life represents the freedom that comes with God’s total forgiveness.

Rudolph Otto, in his book The Idea of the Holy, noted that people experience God as one who is “mysterium tremendum et fascinans.”  He is mysterious and tremendous, and because of that, God’s presence is intimidating.

But God is fascinating: We know that God’s agenda for our life and for all creation is something that fills us with unspeakable peace that surpasses all understanding.

As we come to God, we may have confusing, conflicting feelings of both fear and joy.  In the end, however, we worship a living Savior who accepts us just as we are.

One thought on “The day after Easter: Fear and Joy”