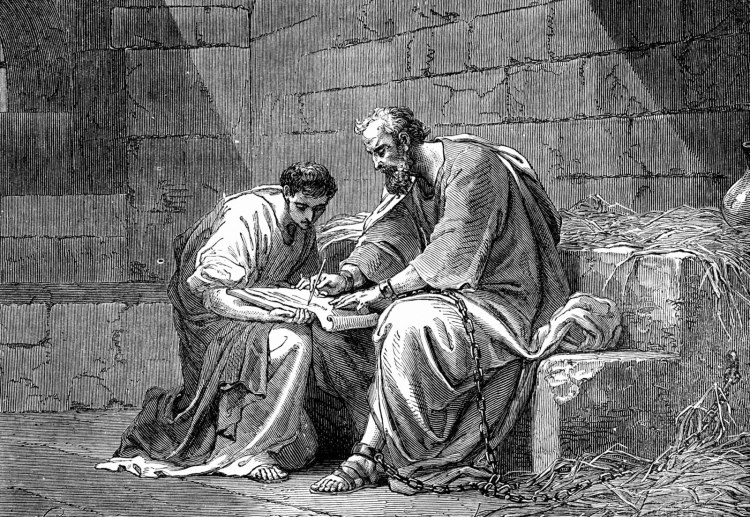 St. Paul had his fair share of persecution.  The book of Acts records how Paul, persecutor–turned–evangelist, founded churches and suffered as a result.  The book concludes with Paul in jail, his fate hanging in the balance.

Founding a little church in the Macedonian city of Thessalonica was especially difficult.  Acts 17 states that he preached about Jesus in the synagogue and won only a few converts; the rest gathered an angry mob and accused him of treason.  He barely escaped to Athens.

The Bible contains two letters that Paul and his fellow ministers, Timothy and Silas, wrote to the new church in Thessalonica. In the letters, Paul expressed concern as well as praise for the church’s perseverance.

He sent Timothy back to the church in order to encourage them “so that no one would be shaken by these persecutions” (3:3a).

Paul, however, takes an odd turn after that.  Rather than encouraging them to rebel or retaliate against their foes, Paul reminded them that persecution was a part of what it meant to be a Christian.

“You yourselves know,” he wrote, “that this is what we are destined for…we told you beforehand that we were to suffer persecution” (3:3b-4).

The church needed reminding that when they chose to follow the crucified Lord, they too promised to follow him even unto death.

Even Jesus did not shy away from this truth: “Those who do pick up their cross and follow me cannot be my disciples” (Luke 14:23).

Over the past year, I have heard many Christians claim they are being persecuted for their faith.  Some say that persecution comes from an over-extended government bent on imposing morally questionable legislation, while others argue that persecution is a result of the loss of Constitutional rights.

Yet, when compared with Christians in the rest of the world–many of whom face exile, death, torture, rape, and exploitation directly due to their faith in Christ–it seems like what we call persecution is merely an inconvenience more than anything else.

According to Halee Gray Scott writing for Christianity Today, nearly 100 Christians are martyred for their faith every month, and two-thirds of the world’s nations discriminate against Christianity as a general rule.

According to Scott, “We’re incensed when a millionaire is suspended from a reality television shows for expressing his faith in a coarse manner…But we turn our heads and avert our eyes when the blood of the martyrs, our fellow Christians, cry out to us from the ground.”

I agree with Scott, and I would add that we spend too much time trying to retaliate against those who seem hostile while neglecting to repent for some of the things we say and do in the public sphere.

In the midst of persecution Christians have the greatest opportunity to reflect the best of the Gospel: Even as recipients of hostility, we share the love of a non-violent Lord who declared that compassion, forgiveness, and inclusion–not exclusion or divisive speech–are holy actions that represent a holy, merciful God.

While rejoicing in spite of hardship, we bear testimony that God’s purposes for us will triumph even over death itself.  We bear witness to a heavenly call in which we are not commanded to fight back, but to forgive and share the Gospel of Jesus Christ.

Paul wrote that the Thessalonian church communicated “the gospel of faith and love” (3:6).  Theirs was not a campaign using worldly tactics, but of living out the Good News in which Jesus was King of kings and Lord of lords.

They exchanged protest signs for faith, letters to editors for planting seeds of mercy.  They included people in their fellowship rather than exclude others who did not share their particular vision of the world.

I’m still not convinced that Christians are persecuted for faith in this great country of ours.  The world is doing exactly what the world always has done, it cannot do any other.  But Christians who claim to follow Christ have the choice to do what is right, say what is wholesome, and advocate on behalf of the oppressed rather than the privileged few.