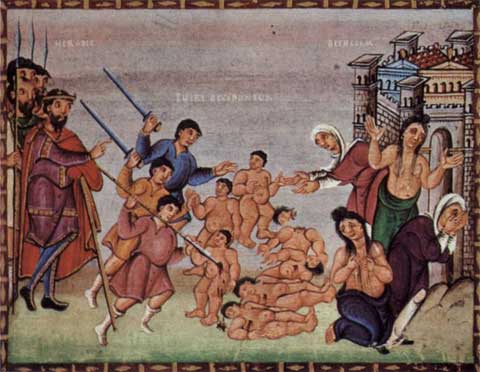 I received a letter from a good friend a few days after Christmas.  He wrote it on Christmas Eve, so I was humbled and honored that he would think of me on that very special holiday night.

He told me about things that were new, about his girlfriend, and about their holiday together.  Then he asked a very simple question:  “How was your Christmas?”

I thought about that for a moment.  Christmas was really good overall.  I had good company, good food.  I made a baked ziti that was a big hit with the family.  We received great gifts this year.

But, although Christmas was very merry, I felt something gnawing in the background–the feeling that something wasn’t right.  I knew that when I was having a good Christmas, I was still burdened with grief over the loss of my father this past summer.  While I was enjoying that delicious baked ziti, a civil war in South Sudan was ravaging innocent lives.  I knew that while I was sharing gifts with my children, a family in Colorado was grieving the loss of a child to another senseless act of gun violence.

Today’s lesson from Matthew’s gospel starts off with a very merry Christmas, but then turns to the tragic event of violence wrought by a ruthless dictator.

The story unfolds like a dramatic movie: Wise men who anticipated the coming Savior of God saw a star in the east and obediently searched out the Christ child.

The magi worshiped Christ with joyful rejoicing, yet something was just not right.  They had come to Israel searching for him, but when they stopped to ask directions about the new “king of Israel,” the puppet king, Herod had grown suspicious and frightened.

A dream directed the magi elsewhere and, while they ventured back to the desert by a different route, Herod became angered by the subterfuge and killed all of the children, age 2 and under, in “the little town of Bethlehem.”

We don’t know what to make of the story.  Like Luke and John, we’d rather keep the ordeal out of the text altogether.

Matthew is courageous, however.  He tells this sad story and doesn’t shy away from it.  He doesn’t let us–or Herod–off so easily.  He shows Herod’s true colors.  He doesn’t let us get in a tunnel-vision state of denial as to the amount of evil that people and events can muster given their own devices.

Herod, as you may know, was not the best of characters anyway.  He was known to be a ruthless, vile tyrant accused of murdering several wives and sons who threatened his power.  A story is told that while Herod was on his deathbed, he had nearly 300 political officials executed in one night just to make sure everyone knew who was boss in both life and death.

It was Caesar Augustus who once opined that it was better to be Herod’s pig than his son.  So, here we have a Herodian story rudely disrupting our yuletide joy.

Hope was not all lost.  Through it all, Herod’s plot continued to be foiled as an angel informed Joseph in a dream to escape, the blessed family fled safely to Egypt, and poetic verse from Jeremiah 31 erupted as a result of the “Murder of the Innocents”:

“Rachel cries out for her children; she will not be consoled.”

Rachel’s cry recalls other tragedies in the life of Israel, and this is intentional.  First, it recalls her own son’s (also a Joseph) fate when he was enslaved and sold in Egypt, thus unfolding the drama that eventually led to the death of the first-born children of Israel and of Egypt, and the eventual liberation of the Exodus event.

It also recalls the Babylonian Exile, whereby Jewish exiles were forced to travel through the very town–Ramah–in which Rachel was supposedly buried.

We get the sense in the poetry that Rachel refused consolation because she was–metaphorically speaking–helpless in these two former events and in the third ushered in by Herod.  The only thing she could do was cry out, for crying in the Bible was oftentimes the only way for the helpless to protest against injustice and God’s apparent absence.

You can almost hear the boisterous questioning in the subtext of this lesson:  Where is God in all of this anger and rage?  Why did God not warn the other families of Bethlehem, only employing two companies of angels to tend to Joseph and Mary and to the magi?  Why didn’t God simply strike Herod dead before he could carry out his poisonous and paranoid plot?  Why such a “bah-humbug” story to ruin the whole festivity?

By the time Joseph and Mary came back to Bethlehem, they perhaps had questions of their own.  I’m sure that when they arrived, they would have noticed more gravestones than usual, that the earth was still freshly turned over-and-again under their feet, that the grass had yet to grow back in the cemeteries.

Surely they were aware that the child they held was to be the savior of humankind, not the destroyer of it, and that the cost would be almost too high if the battlefield between King Herod and the King of kings were to only take place in an environment of bloodshed and violence.

Perhaps, however, they were also aware that that’s how God worked.  Perhaps they knew that God was not going to give cheap answers and easy cliches, but rather come into humanity as helpless as we are.  Perhaps God’s entrance into flesh-and-blood as an innocent child was the only way for God to join in the protest against injustices that would only be defeated by another helpless situation when it came time for a trial and cross-bearing execution.

Perhaps, but isn’t it like God to always keep us wondering?

One of my seminary professors was the late John Claypool, an Episcopal priest who lost a young daughter to leukemia.  He wrote a series of sermons that stretched through her diagnosis, treatment, and eventual death.  In one of those sermons, he wrote something profound related to the very questions that accompany grief, paralysis, and helplessness:

“When the question is raised, ‘Does faith really make a difference when the bottom falls out?’ two presuppositions figure prominently into the answer.  One is the kind of expectation one has in a crisis, and the other is the particular vision of God that one takes with them [sic] into the shadows.” (Tracks of a Fellow Struggler, p. 48).

I think Matthew tells this story of Herod’s abuse of power and Rachel and Jesus’ helplessness because Matthew is willing to take faith into the shadows.  There, he finds light from the perspective of God’s liberation of Israel from Egypt.  He quotes scripture more than any other evangelist, and he draws most of his scriptures from prophetic caches that have Exodus in mind.

Scripture for Matthew was the awakening light, a light that testified to a God that comes into tragedy to make things right in due time, but seems to come only when protest fully defeats the denial that tragedy is still with us in the first place.

Matthew’s use of scripture is then, if anything, an antidote to denial.  It is an antidote to the denial that poverty still exists even though our merry Christmases flourish in a culture of wealth.

It is an antidote to the denial that so many people we root for use violence as a first-resort for situations of retribution.

It is an antidote to the denial that suffering continues to happen daily when we neglect to take into account our economic and ecological footprints.

It is an antidote to the denial that there are so many who are lost because we forget to share the Good News of the gospel of God-with-us.

Only when we bring faith into the shadows and take this antidote will we too wake up to the freshly-turned earth that still haunts us from beneath our very feet.

The interesting part of this scripture text is that people like you and me–humble and simple and not of great stature–Mary and Joseph, bring God into the shadows of their neighborhood and community.

Like them, we, the church, are called to birth, bear, and bring the presence of Christ into our own darkness with the promise that this Child will be victorious over every power and principality that seeks to destroy it.  Ours is a message of protest and a message of “joy to the world” even in the face of everything the world uses to war against our witness of cross-shaped triumph.

We come, like Matthew, bearing the Word and the hope that denial does not have the final say, that although trouble lurks in the subtext, God will indeed make all things right now and forevermore be it in our time or in the postlude of all our history.