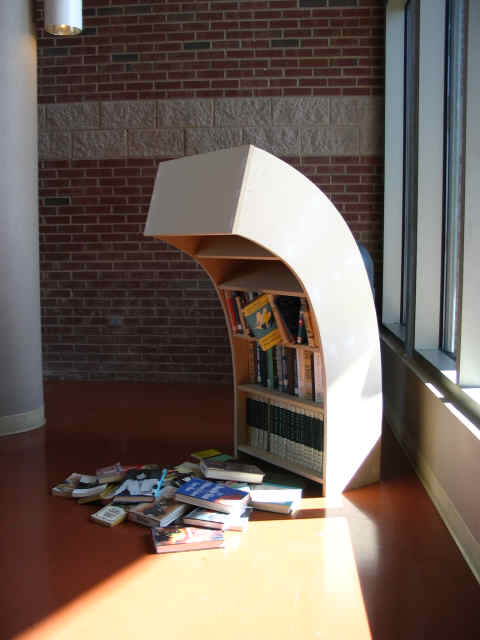 In the 18th century, a philosopher-poet by the name of Xavier de Maistre, was sentenced to house arrest for participating in a duel.  Since the penalty consisted of being homebound for over a month he decided to go on a journey and write about his exploits.  This journey was peculiar, however, in that he did not leave his home.  The journey took him to different parts of his bedroom, his house and kitchen, living room, and his very soul.  It was aptly entitled Journey Around My Room.

If your life is anything like mine, I bet you that you have taken similar journeys—not necessarily around your house, unless you’re cleaning of course—but around your very soul and life.  I remember being in middle school—that time in which young men and women have various identity crises and are compelled to discover who they are—when I took a journey around my own soul.

On my first journey into my soul, the first place I went was the living room.  There, on the bookshelf, were all those Italian trinkets I’ve picked up over the years.  Many of them from New York—like that attitude on the third shelf.  I remember that trinket; it’s not very helpful when coming under the auspices of outside authority.

Then, on to the couch, and you’ll find some real comfortable cushions.  That, and a lot of crumbs from my incessant snacking from the night before.  I’m still not sure why “sloth” was stitched into the arm doilies.

I journeyed next into the kitchen and saw some remnants of my mother’s cooking—the cookbooks that tell me how to cook all of those things people seem to like really well—lasagna, baked ziti.

And the fridge is always full.  One time, I tried to put a lock on that fridge, one of those fancy timed locks that only open during breakfast, lunch, and dinner time and help you keep track of calories.  The lock had since been broken.  I’m sure it was some burglar in my home who did the breaking.  I wish he didn’t leave evidence behind, a crowbar with the word “gluttony” engraved on it.

Enough of the kitchen; on to the bedroom.  I took a peek in there only for a second.  That’s some private stuff, you know—it’s personal.   Trust me, folks, you don’t want to go in there.  I mean, don’t take it personally or anything, but I didn’t even let Jesus in there either when he came to visit.

In my late teens, I took another tour through my soul, but things didn’t look the same.  The couch, the fridge, the bedroom—it just didn’t feel right. I didn’t feel at home.  I tried to get comfortable on the recliner and read some of the books on the bookshelf, but they seemed like distant strangers.

Also, I noticed that the lay-out of my home, the very blueprints, and details all the way down to the placement of the nightstand in the bedroom, were just like those of my friends.  Granted, they had some extra goodies in their refrigerator, a few more beers and some whiskey if I recall.   Some had marijuana shavings in their couches along with the crumbs.

So I got baptized.

You ever see a house that has been ravished from a flood?  I saw my first house like that when I lived in Homestead when Hurricane Andrew visited Florida in 1992.

When you walk through a home that is damaged from flood and tornado, things don’t match up.  You find shoes on the roof, cars in the tv room, sailboats in the middle of the crosswalk down the street, and an unmistakable water-line running throughout the house that sits just below the ceiling.

The next time I saw something like that was when our church went to help rebuild homes in New Orleans after Hurricane Katrina.  That faint smell of mildew and rotting wood had become all too familiar by then.

We stayed in an elementary school that became a makeshift relief center, but the classrooms were still damaged from the flooding that occurred.  Computers, notebooks, shelving, and desks were all over the place.  Again, there was that uncanny waterline just below the ceiling.

I think I was 17 when my youth pastor pushed my head under water in the lake behind our church and said, “I baptize you in the name of the Father, the Son, and the Holy Ghost.”  Like those homes going through a flood, my very soul became exposed to a tsunami wave that turned my life upside down.

The gluttony, the sloth, the sins that pervaded my life—the very things that enslaved who I was, even down to the Italian trinkets on the bookshelf—were swept away in the divine waters of faith that day.

“We have been buried with him in baptism into death,” the apostle Paul wrote in his letter to the Romans.  And our life is never the same—Our comfortable living room, well-endowed refrigerator, the very identity that we think we have every right to call our own, is now marked with a deluge of the Holy Spirit.  The waterline of His presence is unmistakable in our lives.   Years of keepsakes, recipes, and trinkets that made us who we were before the baptism are gone.

“The old has passed away; the new has come.”

Some of us want to return to our old life and take it all back, but it is folly to try to go back to your old life before the Holy Spirit entered your soul in such a powerful way.  You can try, but even if you rebuild in the same place with the same materials and the same foundation, something will eventually give way.  The mildew smell will return; the foundation will continue to sink in storm-drenched earth.

This new life, this new body we are given when we are baptized and raised in Christ Jesus becomes a “temple” of the Holy Spirit.  You are the home to which God now forwards His mail.  And, with God taking up residency in our soul, we start to live differently and hear the call of mission differently:

“Go,” Jesus tells us in the Great Commission, “Invite others into your home so they see that you are different; and, when they ask where you got your beautiful furniture, you can say that its on loan from the Craftsman of the Universe.  Then baptize them in the name of the Father, the Son, and the Holy Spirit.  Show them how to decorate their place, a palace fit for children of the Most High God.”

When we turn to our text for today from 1 Corinthians 9, it is the decorating part that we are taking a closer look at.  There, in the big metropolis of Corinth, small churches started to sprout as more people believe in this newly minted, fresh Jewish sect called “Christianity.”  People knew that being a Christian meant worshipping differently; but, by the time we get to the 8th and 9th chapters of Paul’s letter, we see that not everyone got the memo.

Several people in the community forgot to let Christ all the way into their lives and change the decor in their soul.  They want Jesus–there’s no doubt about that–but they want to keep their furniture too—the fridge full of too much booze, the couch littered with last week’s blunt, not to mention yesterday’s gluttony.  They forgot to throw away those old magazines that are in the nightstand up in the bedroom.

Paul understands where they are coming from and tells them in chapter 8:

“Being a Christian gives us liberty and freedom,” he says, “And its natural to take this freedom for granted.  Why should we change our home décor when God’s grace saves us, no questions asked?”

Then, in chapter 9, Paul takes a left turn, and its hard for us to follow where he is going.

“I am all things to all people, too, and my own furniture in my soul make look similar to those who are not Christians.  If I invite a Buddhist to breakfast, I may show him the statue of Buddha I keep for decoration on the Hearth.  If I invite one who is rich, I bring out the best silverware.  If I invite a slave, I may try on the old shackles I picked up when I went to jail.  When I meet someone who is marginalized and discriminated against, I tell them the story about the one time in Iconium when my own Jewish brothers stoned me and left me for dead.   Yeah, I become all things to all people.”

Do you know the difference between subterfuge and sabotage?

Subterfuge allows us to become a servant to all those who have yet to meet Christ.  We are can relate to folks and be holy, but not snooty.  We are different and stand out, but we are not judgmental.  And we are certainly not jerks.

Sabotage, however, happens when I want so badly to be friends with the world, to be buddy-buddy with everyone, that the very subterfuge I seek backfires on me and my lifestyle—The very furniture that sits in my soul sabotages the very purity of my faith.

Paul found that the blueprint of the Corinthians’ souls  looked so much like the everyone else in the world, that there was no difference between these Christians and those who were not Christian whatsoever.

When we accept Christ into our soul’s home, we must follow Christ into the waters of baptism and follow him to a resurrection in the newness of life.    None of us can go untouched by the Spirit’s deluge–There has to be something that makes us different.

Here at Trinity, we don’t believe in the type of evangelism that depends on coercion or beating people over the head with the Bible.  We don’t judge first and preach later.   Our desire is to say the most appropriate things in prayerful humility and be as compassionate as possible.

But we must not be so careful that our desires water down our witness or dumb down our faith, lest they sabotage the holiness to which God calls all of us.