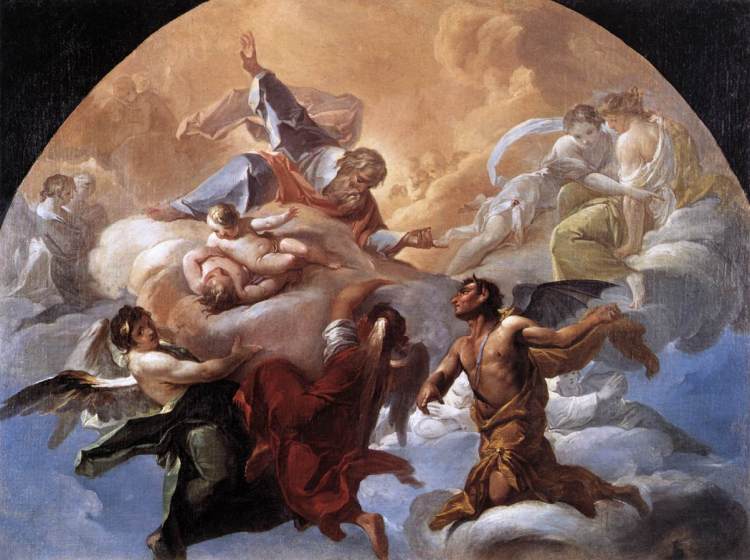 Embedded deep in the book of Revelation–chapter 12 to be precise–there is a scene that paints a very different picture of Christmas morning and the birth of Christ.  John, the recipient of Jesus’ revelation, records a vision in which he sees what appears to be a woman clothed with the sun.  She is pregnant and about to give birth.

John then sees another sign, a dragon that stands ready to devour the child upon the child’s birth.  The child is born, and just before the dragon pounces, angels snatch the baby to heaven and send the woman into the wilderness.

There is great controversy surrounding the interpretation of this rich text and many questions remain.  Whether it is an alternative scene of the Christmas morning is under scrutiny.  No matter its meaning, historical or otherwise, we find that this story reminds us of a simple truth: The Enemy is always ready to devour us in our most vulnerable moment.

There are many occasions in the Bible in which Satan stands ready to steal the hearts, minds, and souls of God’s children.  In Job, Satan the Accuser went “to and fro” upon the earth (Job 1:7).  In the gospels, Peter became especially vulnerable when he heard about Jesus’ eventual death.  Jesus “rebuked” him and told him to “get thee behind me Satan” (Matt. 16:23).  First Peter advises us to keep alert and sober, because “your adversary the devil prowls around, looking for someone to devour” (1 Peter. 5:8).

When we forget that Satan is one who draws near to us simply because we try to do God’s will, we forget Satan has the power to keep us from reaching our greatest potential in Christ.

Ever wonder why you fear telling your co-worker about Jesus when she talks about her failing marriage?  It might just be Satan keeping you from telling the Good News.  What about the many times you make a promise only to break it the next day?  It just might be the Enemy tempting you, and quite successfully at that.

Too often, we blame our shortfalls–individual and communal–on other influences.  My own tradition–that of the progressive movement–has a bad habit of blaming social or economic systems for the woes of humanity.  Why blame Satan when CEOs make for excellent scapegoats?

And conservatives aren’t exempt–It’s not all about individual responsibility and laziness when it comes to society’s moral decay.

After reading Revelation 12, we can be reminded that the real culprit to many of our issues might not necessarily be as explicit as an unethical corporation.  The real culprit might just be a Spiritual Being, eluding us at every turn and deceiving us into believing that we can master its very presence.

The Bible attests to the fact that Satan does a good job of flying under the radar while he binds us and keeps us in the throes of despair and death.  The gospel of Mark (5:1-20) tells of a demoniac who lived in a cemetery.  The local villagers tried to chain him, but to no avail.  Interestingly, even though the man broke out of the chains, he still did not leave the cemetery.  He didn’t need chains to keep him bound to the evil presence in his midst.

Only when Jesus liberated this captive from spiritual bondage did the man finally become free enough to return home as a healed individual.  No system, political or otherwise, or excuse kept the man in the tombs.  He was always free to go home, but Jesus named the problem–there were demons about–and gave the man permission to move beyond the pretense of shackles and chains.

Christmas morning allows us to celebrate Christ’s birth, but it also makes room for God to give birth to something new in our life.  My prayer is that God will give all of us liberation from the Enemy, that we may reach our greatest potential in Christ for the sake of the Gospel.