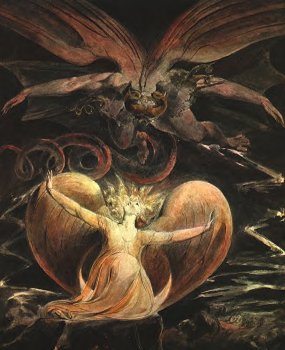 “Thus says the Lord of Hosts: I will save my people from the east country and from the west country; and I will bring them to live in Jerusalem.  They shall be my people and I will be their God, in faithfulness and righteousness.” (Zech. 8:7-8)

“When Herod saw that he had been tricked…he killed all the children in and around Bethlehem who were two years old or under, according to the time that he had learned from the magi.  Then was fulfilled what had been spoken through the prophet Jeremiah: ‘A voice was heard in Ramah, wailing and loud lamentation, Rachel weeping for her children; she refused to be consoled, because they are no more.” (Matt. 2:16-17)

“Then the dragon stood before the woman who was about to bear a child, so that he might devour her child as soon as it was born.” (Rev. 12:4b)

For the past few weeks–about four advent candles ago–we have been taking a close look at what this whole Advent and Christmas thing means to us.  I must admit: Finding a fresh voice for an old tale has been difficult for me–We so want a Christmas that is like a Snickers bar, something that simply satisfies.  We sing, we remind each other in conversation, and we preach that Christmas is ultimately about the coming of the Christ-Child.  That’s what Advent means, after all, “coming.”

Yet, in the back of our mind, we also (I think) instinctively know that this yearning for Christ’s coming is more than just a ploy to get us into the “reason for the season.”  It’s a yearning for Christ’s return.  You know, all of that Second Coming business we hear about in doomsday sermons and read about in that Left Behind book series.

When we mention the Second Coming of Christ, its hard not to want to change the subject because it has been tied to doomsday for so long.  Our blood pressure begins to rise, and we start to recall all of the images that usually relate to the Second Coming: the blowing of trumpets, earthquakes and dark skies, antichrists and four-headed monsters.  Frightening images, for sure.

I remember a period in my Christian life (when I was in high school) when I started to take a closer look at this Second Coming business.  I knew that, eventually, when Christ comes, the backdrop of our spiritual lives–the warfare between good and evil, angels and demons–would break forth into plain sight.

I wanted to be prepared, so I began reading all sorts of books.  One set of books were novels by Frank Peretti, who wrote captivating tales of said spiritual warfare breaking out onto the earth.  I read those books, like “Piercing the Darkness,” and became all the more fearful about this whole matter.  It was the type of fear that kept me in line.  (“Is this where you want to be when Jesus comes back?!”)

As I got older, this fear of good and evil grew until, finally, I became so sick of that Christian life.  It was in college that my belief of God’s condemnation–God’s judgment–in my life became too heavy to bear in the first place, and I wanted to cast off the whole lot altogether.

Now, mind you, I didn’t go off of the deep end.  I didn’t start binge-drinking or sleeping around.  I didn’t start some voodoo cult.  But my friends, my wife included, did notice a difference.  I prayed less; I became more cynical about my faith; I certainly didn’t talk about Jesus all that much.  It was a crisis of faith.

I was just sick of living in fear every day, wondering when Jesus was going to come back and judge me, along with everyone else–the living and the dead.

We have come together today to recall several Christmas stories that, on the surface, seem rather frightening.  The two stories–from Matthew 2:13-23 and Revelation 12:1-11–both have in common threads and similarities, and both deal with the Christmas message in one way or another.*

The first story comes from Matthew’s gospel and has to do with a king who wanted to insure a stable reign.  Upon hearing from some traveling magi that a “king” was born, Herod signed an executive order to have all of the children in and around Bethlehem (two years and under) killed.  This would have insured that no rival, no “alternative king,” would supplant Herod’s already fragile rule.

For those of us who have little ones, this is a frightening story indeed, a story of genocide against the most vulnerable in society.   Matthew even broke out in liturgical hymnody as a result of the dread within this tale–a quote from Jeremiah: “A voice was heard in Ramah, wailing and loud lamentation!”

We know, however, that Herod didn’t succeed, for only a short time before his executive order, Joseph and Mary made their way to the wilderness landscape of Egypt.

The second story is not unlike the first one, aside from the fact that it uses a lot more poetry and metaphor.  This story sits at the center of John’s Revelation and dramatically tells of a woman–clothed with the sun, with the moon under her feet–who is about to give birth.

It then tells how, while the woman goes into labor, a great red dragon appears and stands over her, ready to devour her newborn.  At this point, the narrative speeds up like an action flick:  The moment she gives birth, the baby is whisked away to heaven.  She makes a run for it to a wilderness place prepared for her by God–A place very much like Egypt.

If that wasn’t frightening enough, the text tells us that war breaks out in heaven between a cohort of angels and the dragon.  The angels manage to defeat the dragon, who falls to earth and runs rampant, tormenting all of humanity.

And here, not unlike our first Christmas story from Bethlehem, the text breaks out into a hymn–But this hymn is not one of lamentation, but victory:  Christ and His saints conquer the dragon by the blood of the Lamb, the Word of their testimony, and perseverance through adversity, even unto death itself (Rev. 12:10-12).

Within this hymn, within the power of these words–the praise of the saints and elders and angels, all of whom are confident in Christ’s reign–we see something special happening.   Something begins to shift and transform and morph.  It is the power of God coming forth from His Word, revealed and proclaimed in this place (see Rev. 1:3).

We enter the text frightened…Like we enter the first story; we are so overwhelmed and scared–A dragon, Herod, the Roman empire are ready to devour that Christ-Child who was said to be the ruler over all nations for all time–And we can’t help but to RUN, RUN!

Run, with Mary and Joseph to Egypt!  Run with the woman, she who is clothed with the sun–Run to the wilderness!   …To the place where this whole, grand story started in the first place!

Egypt!  A place of slavery and suffering and fear, but ultimately a place of God’s liberation and freedom and victory! Victory: Over the powers of darkness and principalities and spiritual forces, over all of the Pharaohs and Herods and Dragons in this world.

These are frightening adversaries, but there is also liberation in the message of Christmas.  Fear does not have to have the final word, and that’s the Good News of this season.

It was right after my sophomore year in college, at the tail end of my crisis of faith, when I went back home, as I did every summer.  I had, as I mentioned, become quite cynical with this whole Christian faith thing; so, when I went into my bedroom (which my parents left undisturbed while I was away), you could imagine the rush of emotions I had when I saw all of those old books by Frank Peretti and other doomsday authors on my bookshelf.

I remember taking all of those books and, in disgust, throwing them into a huge garbage bag and tossing them into the garbage.

You see, folks, what I discovered from that act was not that I was throwing God away, for certainly God had been with me the entire time.  Rather, I was throwing away the whole notion that my faith was to be lived out under the heavy hand of God’s condemnation–the fear!–that lurked within the pages of bad theology.

It was a throwing off of the fear of loss–a dragon who devoured my Christmas hope within my heart–in exchange for an Exodus liberation.

It was within those pivotal summer months that I heard God’s call to the ministry.  God called me out of Egypt (Herod was dead, the dragon defeated!) and brought me into a place of liberation and of victory.

It was as if I heard God telling me: “Too many of My People live under a yoke of fear rather than in the light of Jesus’ liberation!”

“Nothing so infuriates me as the incapacity of seemingly intelligent people to get it through their heads that God doesn’t go around this world with his finger on triggers, his fist around knives, his hands on steering wheels” (see notes below for source).

We fear so much, we almost forget what it’s like to approach God from a place of adoration and grace–We have gotten used to the dragons and the Herods of our life, we forget that what we approach in Christmas time is a baby, innocent and pure–a symbol of God’s love, a person who stands ready to crucify our fears once and for all, and even destroying death itself.

We no longer fear because Christmas is ultimately about life and not death.  We know that Jesus is not dead–His words and works did not end in Revelation.  Herod killed the wrong children!  Ours is a worship not focused on an historical figure–someone on the History or Discovery channels–but on a contemporary, living Christ whose reign lasts forever and ever, whose leadership continues to speak hope into our lives, whose Spirit brings us “from partial to fuller truth” with every passing moment.

I can’t help but to break out into poetry yet again, and read “Proclaim Liberty” by Kenneth Sehested:

Let my people go!  Proclaim liberty throughout the land!

Independence from the/Reign of Death has been declared!/  The boundaries of transgression/have been breached.

The Liberty Bell of Creation/echoes across the hills and plains./The God who forges a people/of redemption sets the covenant/of freedom as the bond of bounty:

Proclaim liberty throughout the land!

Fear no more!  Amen, and Amen!

*The interpretation of Revelation 12 is, as one would expect, hotly debated.  I must admit that I am making a leap (quite a leap some would argue) in making the story of the pregnant woman and dragon a Christmas one.  There is, however, the notion that the artistry of Revelation is within the interpretation itself.  The mystery and magic of Revelation, I contend, allows for such alternative readings.  Mind you, I would never submit the interpretation I use in this sermon to a scholarly journal; but it works overall, especially when set against Herod’s Christmas genocide in Matthew 2.

The paragraph that includes the phrase “from partial to fuller truth” is a re-envisioning (both thematic and in grammar) of a paragraph in Harry Emerson Fosdick’s classic sermon, “Shall the Fundamentalists Win?” also in A Chorus of Witnesses, p. 244.

Kenneth Sehested, “Proclaiming Liberty,” in In the Land of the Living: Prayers Personal and Public (Raleigh: Publications Unltd., 2009), pp. 60-61.