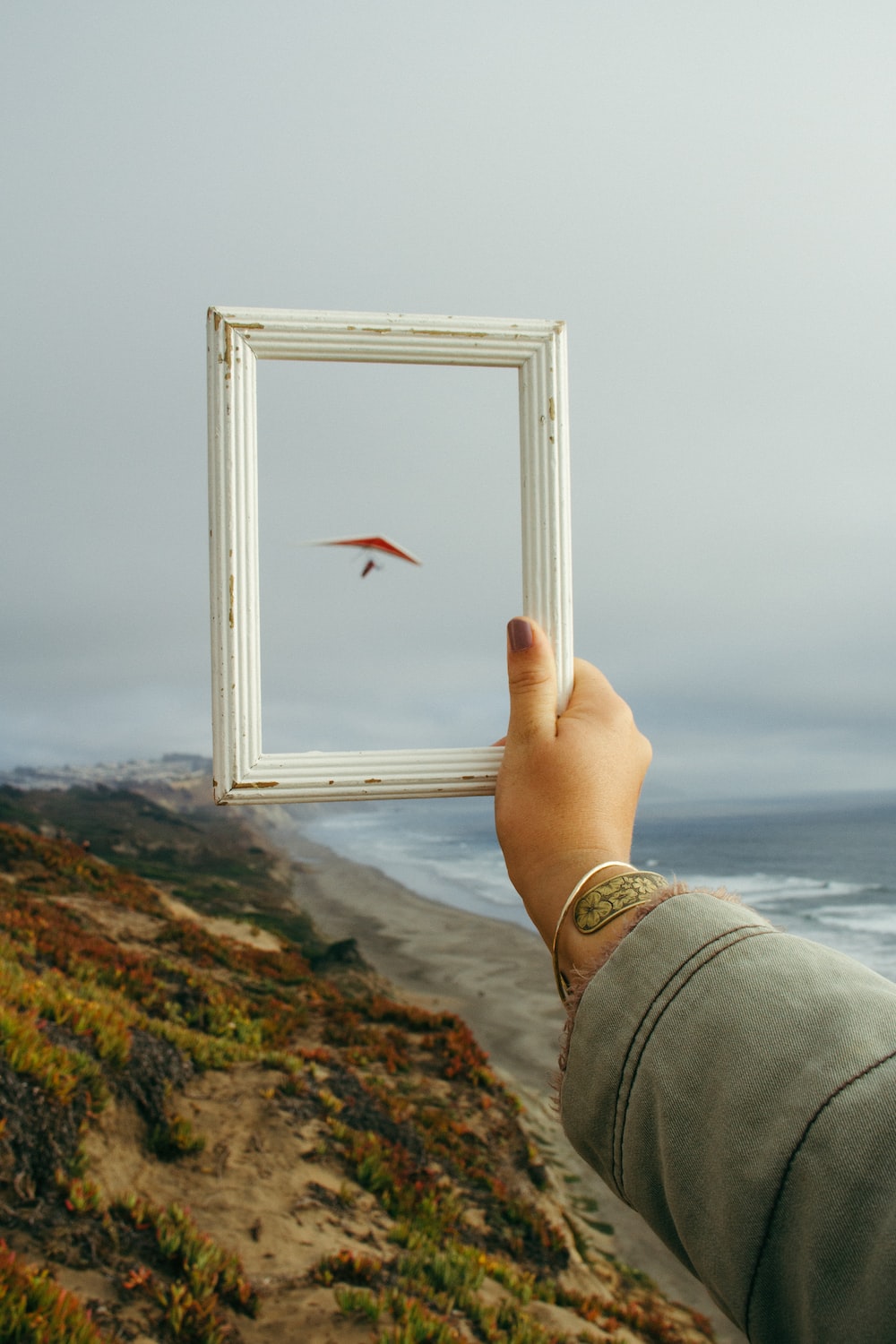 A few years ago, I gave my wife Julie a hang-gliding trip as a birthday present. We spent the night in Chattanooga and got up early in the morning for a lesson at Lookout Mountain where she and two other students spent a few hours with an instructor to learn the basic skills of the sport.

They got comfortable with the weight of the glider, walking first on level ground and then jogging and even running with the glider on their shoulders.

Once they got comfortable on level ground, they started working with the glider on a slight slope and then on increasingly steeper hills. And as they started jogging and then running down these hills—with this huge glider wing above them—they actually started to take off!

The glider started to lift them up into the air, at least for a second. And then all of them did the exact same thing—a great big Superman belly flop into the grass.

When the glider starts to lift you up into the air, beginning hang-gliding students have three natural reactions.

First, they look down because they feel as if they are losing their footing. Second, they grip the metal bars of the hang glider as tight as they can, holding on for dear life. And third, they tend to stop running and try to leap into the air in an attempt to give the glider the final push it needs to really take flight.

And when you do those three things, you do a great big Superman belly flop into the grass.

So guess what the hang gliding instructor kept shouting—over and over again?

Head up, light touch, keep running. That repeated mantra has stuck with me. It’s not just good advice for hang gliding students; it’s good advice for all of us in 2020 as we face what has the potential to be a pretty turbulent year.

Handle things with a light touch in 2020, too. Don’t cling to issues or events too tightly or approach people with an overly heavy hand. We all have a lot on our plates, and most people just want what’s best for our community and world just like you do. So use a light touch.

And keep running in 2020. Don’t let the feeling of being overwhelmed or exhausted knock you off your feet or put you on the sidelines. Keep plowing ahead faithfully in the fields where God has placed you. Know that your presence, your work, and your Christian witness matter—and keep running.

The Reverend Matt Sapp is pastor of Central Baptist Church in Newnan, Georgia. This article first appeared on the church’s blog, and is reprinted with permission.

Those of you who know Bob Bala also know he can tell a great story.  I’ve seen his grandchildren drop everything in order to sit with him whenever he utters the words, “I have a story to tell.”

This past week at a Relay for Life banquet, Bob told of a time when he was trying to sell a car to a Baptist preacher in the late 1970s.

The car was a 1978 Toyota Corolla, light blue station wagon.  Bob and the preacher could not strike a deal.  The preacher left, and Bob followed up over the next few days.

Finally, after the third or fourth call, the preacher told Bob, “God told me not to buy that car.”

Bob, in his unique way, was frustrated: How can any man–clergy or not–use God as an excuse not to buy a car?

A few days passed, and Bob made a deal with someone else who traded in a 1974 Toyota Corolla, light blue station wagon.

Bob called the preacher and told him, “Hi, Preacher, I’m calling you because God just sent me the car that he wants you to buy.”

Although that was not the end of the story, and we laughed for quite a few minutes after, I retell that story (with his permission, of course) because it reminds me of the politics of our day — Politics in the public square and politics in the pulpit.

I know that we pastors try to discern God’s will for churches and spend many hours in prayer, but even then I have never said to someone, “God is telling me x, y, and z.”

Now, that does not mean that I haven’t sensed God’s direction in my life or affirmed someone else’s experience with God, but I’ve never been so bold as to say with certainty what God has ever said.

We ministers–and the people of God, too–do not speak in place of God.  Rather, we only come to proclaim the One who comes in the name of the Lord.  We are not Jesus; we only prepare a path so others can hear directly from him on matters important to faith.

This Palm Sunday, many churches will follow in the example of those disciples of old who chanted, “Hosanna in the highest; blessed is He who comes in the name of the Lord.”

It was the time when Jesus triumphantly entered Jerusalem to head not for a crown, but for the cross.  People went before him to cast their cloaks on the ground and praise God–a symbolic, but very real way of declaring that this Messiah is coming to be king of Israel.

Yet, when it came time to speak for God, they were silent.  Only Jesus spoke to the powers that were in charge; and only Jesus was able to say, declaratively, what it was that God was doing in the larger story of the world’s salvation.

Palm Sunday is reminiscent of the baptism of Jesus, for it was at that time that John the Baptist declared that he too was preparing for the way of the Lord.  When Jesus came to be baptized, John said that Jesus was the Lamb of God, the very son who came to save the world from its sin.

John said that only Jesus had the authority to speak for God and that “The Lord must increase while I decrease” (John 3).

God’s purpose for John was to prepare the way for the Spirit that others might hear God on God’s own terms.  Even we preachers, who spin some great sermons, proclaim that truth: That Jesus might meet people in the pews right where they are in life.

Politicians are much like preachers (or is it that preachers are like politicians?), and many a candidate will try to speak on God’s behalf.  It is their way of attracting the “evangelical” or “values voter.”

As a requirement for her Master of Divinity degree at the McAfee School of Theology, Atlanta, Georgia, the Reverend Karen Woods wrote a thesis on race relations in the local church.  In it, she argues that slavery, discrimination, and contemporary conflicts surrounding race did not suddenly appear out of nowhere.

Rather, the dysfunction of racism grew out of long theological traditions that manipulated the Bible to justify one race’s subjugation over another.  Sadly, although our ancestors were people of their time, this theological context sat squarely on a certain systemic interpretation of the Bible that dehumanized people.

Woods’ thesis reminded me that beliefs surrounding a variety of issues these days result not from spontaneous decisions or platitudes, but from long-held convictions and traditions that require (consciously or otherwise) theological gerrymandering and interpretative acrobats over a long period of time.

If we are still embroiled in the consequences of racism even today, then it should not surprise us that contemporary debates over other hotbed topics will last well into the next generation of Christendom.

Traditions and experience inform how we read the Bible (if we read the Bible at all), and shaping our reading of God’s Word according to such embedded ideologies threatens to undermine the authority of Scripture.

The worst part is when we declare that God agrees with our positions rather than change our minds when we know some things simply contradict Christ’s or the Bible’s teachings.

M. Craig Barnes, writing for The Christian Century, wrote of the dangers associated with biased interpretations of scripture.  He recalled Abraham Lincoln’s Second Inaugural Address delivered on March 4, 1865, in which Lincoln lamented the toxicity that imbues any theology that forces ideology on humanity’s understanding of God.

According to Lincoln, “Both [the North and the South] read the same Bible and pray to the same God, and each invokes [God’s]aid against the other . . . The prayers of both could not be answered.  That of neither has been answered fully.  The Almighty has His own purposes.”

Lincoln went on to declare that the institution of slavery–250 years in the making–will not come untangled as easily as many people in the Union had hoped.  Yet, it was imperative to “finish the work we are in” so as to bring about harmony to a nation divided by political ideology.

Lincoln hit the problem squarely on the head.  Our debates surrounding the most pressing issues of the day such as gun control, environmental stewardship, war, immigration and refugee policy, and federal budgets must indeed play out in the philosophical and political arenas, but must avoid any declaration that God is taking one side over another.  Otherwise, we too will be embroiled in divisions that rend the very fabric of our nation.

Ultimately, when a Christian surrenders to God, she surrenders her “rights” in this world in order to become a fully-recognized citizen in God’s kingdom.  It is to sacred Scripture that a citizen of the Kingdom submits, not to any man-made document or system of government.

God’s call is a singular mission to march towards the cause of the cross.  This results from self-denial and, sometimes, death, if not physically, then of those embedded convictions that conflict with Christ’s values.

Most significantly, submitting to Christ’s lordship means divesting our theologies about God and social politics that perpetuate some of the more hostile elements of faith that play out in our places of worship, politics, and the public square.  Without this important reformation in our churches, we remain steadfast in the very bigotry that our faith condemns.

Without analyzing the long-held beliefs that shape our worldview, we fail to “be transformed in the renewal of our mind,” as Paul so aptly commands in Romans 12:1-2.

My prayer for the New Year is that we will have robust debates in an otherwise uncommon election season, but that we will not use religion as a weapon to wield rather than a balm to heal, and that we will use Scripture to transform our thinking rather than support our myopic opinions about so many issues we face today.  May Christ, not the fascination with our own interpretations of Him, be Lord over our lives.